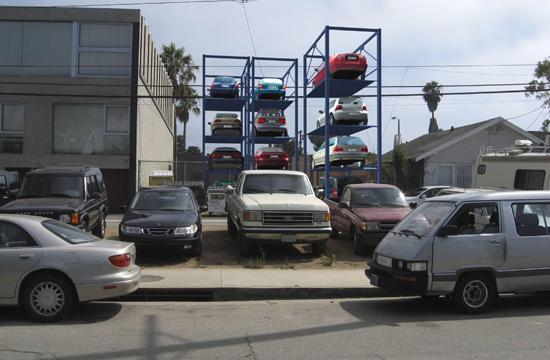 Mechanical parking lifts-multi-level elevator-like structures where cars can be parked-are being used in many cities including New York. But the Venice Neighborhood Council (VNC) took action on August 17 to ensure that car lifts will be introduced to Venice only after reviews concerning safety and noise factors.

The Council was asked to consider two motions on the car lifts. One, a request to amend a Los Angeles City ordinance that allows car lifts, was proposed by John Henning of the Planning Law Group, which opposes the use of lifts in Venice. The other motion was proposed by the VNC Land Use and Planning Committee (LUPC) and recommended that the VNC request an immediate discretionary review of each project seeking use of the ordinance to allow the lifts. (The VNC acts in an advisory capacity only; amending the city ordinance and reviewing projects are up to the City of Los Angeles).

Henning presented a computer simulation photograph of what a three level, 30-foor tall mechanical car lift would look like if placed in the location proposed for a new restaurant project. The restaurant owner wants to put the lift behind the project to be built at the corner of 1305 Abbot Kinney Boulevard and Santa Clara Avenue. The location is across the street from residences.

While a lift would possibly alleviate some of the parking problem in the popular Abbot Kinney shopping area, such lifts are known to make a lot of noise when in use, as cars must be rotated on to the lifts.

Venice stakeholders, during public comment, were largely against the idea. One man referred to car lifts as “a giant Erector set holding cars in an alley that is not very big to begin with.” Another speaker said: “I spent time in Manhattan next to one of these things and they are incredibly loud.”

Henning warned the VNC that “this is the leading edge of a wave that will sweep over Venice,” that is, that approval of the lift under the present Los Angeles ordinance might lead to other businesses installing car lifts before there is any chance for neighborhoods to vet their safety and noise levels.

A few speakers were in favor of the project, lift included. Some members of the VNC also felt that, since parking is a major issue, that it would be wrong to completely ban the use of lifts.

The problem before the VNC was which of the two motions to support. Henning’s motion proposed that the City of Los Angeles adopt a one-year moratorium on the use of car lifts in Venice, until an “urgency ordinance” could be drafted. It also outlined a number of other specific proposals. The LUPC motion, demanding a discretionary review, was shorter and did not mention a moratorium.

In the end, the VNC decided to combine elements of both motions. The LUPC motion was amended with a clause from Henning’s motion mentioning the moratorium and adoption of an urgency ordinance “requiring that all proposals for mechanical automobile lifts used for required parking be subject to discretionary review by the Zoning Administrator.” A majority of the Council voted in favor of the amended motion, sending a message to the City of Los Angeles that Venice does not at this time want mechanical car lifts installed without mitigations to the neighborhood.