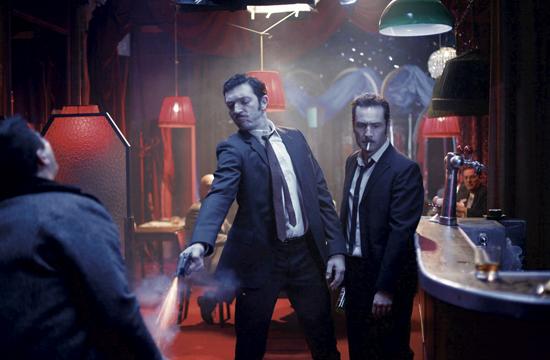 Vincent Cassel is a French actor who has appeared in more than 25 films in France and the United States, but it’s safe to say that he is not highly recognizable to American audiences. That will be a thing of the past as lovers of the gangster genre, in particular, will be spellbound by his work in the two back-to-back award-winning films “Mesrine: Killer Instinct” and “Mesrine: Public Enemy No.1.”

In the films Cassel plays Jacques Mesrine, a notorious criminal, who captured the imagination of the masses with a string of bold bank robberies, daring prison escapes, and outrageous kidnappings for two decades. Under the skillful direction of writer/director Jean-Francois Richet, Cassel’s explosive performance is an experience not to be missed.

Can you talk about gaining 45 pounds to play this role and why the film was shot backwards in time?

Cassel: Although Mesrine is unknown in the States, in France the people know about him from photos. He was much bigger than me so I had to look authentic or the audience would be disappointed. We started with the heavier version of my character because I knew after 25 years of being an actor that I tend to lose weight on the set because of the stress and not eating properly and not getting enough rest. It took me four months to gain the weight and I began to lose it over the nine months of shooting.

What kind of food did you eat to gain the weight?

Cassel: Everything you shouldn’t eat. (Laughter) Drinking beers with syrup in it. Actually, it was complicated because I tried to do it only through food and I realized I couldn’t. I was throwing up every morning so I went to see a doctor who gave me something that works on your insulin so you stop the sugar and fat. It’s not something one should do, honestly. I did because I’m an actor, but I would never do it again.

Your character was a pretty violent guy. What did you like about him and why was he kind of a folk hero?

Cassel: I really put in a lot of effort to not glorify him. In one of the drafts he wasn’t a racist anymore, or violent with women and he came off as being like Robin Hood. I was against that because even though he did everything he did, people still liked him and the challenge was to recreate that on the screen. We didn’t do anything to change what he did and at the end of the day, even though he’s not a likeable person, who solves his problems in a very violent way, people didn’t hate him.

A lot of people, including some of my friends, walked around with tee shirts with his face on it. I thought it was stupid to respect that guy so much. He was gangster who had the reputation of being a killer and robber and in my opinion wasn’t a super-interesting guy. I’d rather be a fan of Mohammad Ali or Albert Einstein. But, what I like about him was his sense of honor or the fact that he was ready to pay the price for his actions, and that’s pretty brave.

Also, he allows himself to say “no” where most of the time, for normal people like us, it’s easier to say “yes” and go with the flow. So when you have someone who says “no” and is willing to die for it, even if he’s a gangster, we admire him because it’s inspiring in a weird way.

During the shoot did you begin to empathize with Mesrine?

Cassel: As an actor, I need to understand why he behaved the way he did, but I don’t have to agree with his behavior to play him. He’s not a comfortable character to portray. He’s always nervous and violent and it’s very tiring to play this guy on a nine-month shoot.

But, it’s not like I identify so much with the character that I feel that it’s me. I know some actors work like that, but I like to have some distance between the character and me. My personal attraction to this project was to confront my friends with the truth about Mesrine thinking they’d hate him afterwards, but they didn’t.

Did you notice a change in your behavior during the long shoot?

Cassel: From my point of view no, but if you ask my wife and friends, yes. (Laughter) I have a tendency to minimize everything as an actor thinking this is normal and I’m just doing my job, but I know that people who live with me say it’s not exactly like that. Actually, as the character, there were many changes in my moods. It’s like when you get angry in life, it lasts for three minutes and then you’re tired. On this movie I had to be nervous or angry every day for 12 takes, so it was exhausting.

Did you become short-tempered?

Cassel: I am already in real life, so I guess that’s why I’m cast to play these kinds of guys.

Have you mellowed out since you had children?

Cassel: Sometimes I have to, but I don’t think your nature changes because of your kids. You learn how to deal with them but you don’t change. You are born with a certain kind of disposition and then you learn what you are and how to use what you have.

Were most of the films shot on location?

Cassel: The good thing about these movies is that although we traveled a bit to Spain, Canada, and America, a lot was shot in Paris. I love shooting in Paris because that’s where I was born and raised so everywhere I go it’s like home and friends even visit me in my trailer. Robert DeNero likes to shoot in New York because it’s his home.

Why do you think Mesrine had such control over the media?

Cassel: There is one thing that is interesting about Mesrine. He didn’t start the media frenzy. We have to put this story in the context of the time in which it was taking place. Valéry Giscard d’Estaing was president and Mesrine wanted to wage a one-man war against the “bourgeois” state and justified his own violent behavior as a response to the brutality of the government and especially of its high security prisons. The left-wing press like “Libération” used him as a counter-power icon and not only did he like it, he understood how to use it.

My take on it is that he finally died because of the media and not because of what he did. Still, today, not one of the murders he was accused of committing has been proven. We’re not really sure that he ever killed anybody. Still, he was shot multiple times in the middle of the street and his body was exposed on the 8 p.m. news on television. So it was a statement from the government that you can’t **** around with them.

What do you remember about Mesrine from you childhood?

Cassel: I was 12 when he died and did hear his name from time to time, but it’s not something you pay attention to as a kid.

The funny thing is I was born and raised in the 18th arrondissement, and that’s where he died, within walking distance of where I lived. My brother, who is a few years younger, was on his way home from playing soccer, when he heard the gun shots. When he came home he said, ‘They killed a gangster in the street’ and then we saw his bloody body on prime time television. It was very shocking.

Did you meet with Mesrine’s family?

Cassel: Of course, but it was very tough to meet them. Mesrine’s daughter came on the set and I was dressed like her father. She burst into tears. It was terrible. But, thank God his children looked at me in a good way. If they hadn’t, I would have been depressed for the whole shoot and nine months is a long time to be depressed. (Laughter) I think the daughter liked me and liked the idea of me playing her father. While we were doing publicity for the film, his son called me daddy on a television show. It was a compliment, I guess, but it was also pretty scary. He sends me messages every Christmas.

Your work in these films is mesmerizing. We look forward to your next movie.

Cassel: Thanks very much.