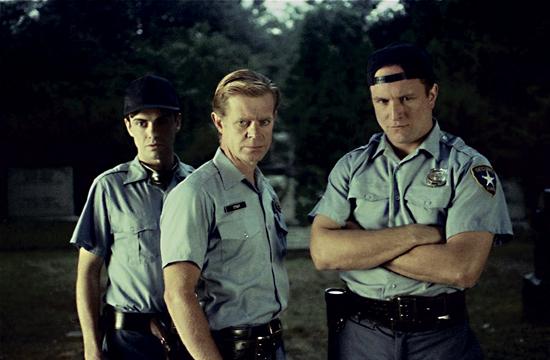 Directed by Robert Bella, also an Atlantic Theatre Company member, the film which played the independent film circuit, including Sundance, has finally been released on VOD (Video On Demand.) The delay was because Bella was in hock up to his eyeballs and had to pass on distribution until the debts incurred in making the film were satisfied.

Made for $150,000, “Colin Fitz Lives!” was shot primarily in the Bronx’s Woodlawn Cemetery and is a whacky story about two mismatched security guards, delightfully played by Matt McGrath and Andy Fowle. Their grumpy boss, played exquisitely by William H. Macy, assigns them literally to the graveyard shift to guard the grave of rock idol Colin Fitz on the anniversary of his death. It seems that people show up every year to perform bizarre acts such as individual or group suicide. In one comical romp after another, the idol-worshipping fans gradually appear during the course of the evening. Macy has some hilarious deadpan moments when he chastises one of the guards for taking a cupcake without asking and visits them in the middle of the night with jelly sandwiches, sans peanut butter, which makes for very funny verbal exchanges.

In your opinion, what is the state of independent films?

Macy: The whole paradigm under which we made independent films has fallen apart. At one point Sundance was getting around 5,000 submissions, but I don’t think they get anything near that number at present. I think someone’s going to solve this problem because there are still people who want to make independent films and people who want to see them and there’s financing available.

The problem is getting them together because there are fewer theatres and you can rent a film now for seventy-five cents and that’s not going to pay for an independent film. I think there is a solution and it could go something like this:

“Honey let’s watch a film tonight.” Then you’ll turn on your TV, which will be online, a home page will come up, you’ll click on independent films, and make a choice. The problem is you’re going to have to pay for it and young folks don’t want to pay for things on the internet because for so many years they could just steal what they wanted.

Do you have an idea for a script?

Macy: Yes. I’m going to write a script about teenage vampire girls who explode. That I can sell! (laughter)

What’s the best way to get financing?

Macy: You have to be honest and tell potential investors that there’s a good chance they’ll lose their money, but there’s that slim chance they’ll make a bleeding fortune. It doesn’t happen often, but it’s enough to keep them in the game. Also, people love show biz and hanging out on the set. At the end of the day, unlike a lot of other investments, they’ll have something to show for it.

Have you produced a film?

Macy: I have and the producers will, in fact, get back forty cents on the dollar, which I told them would be the case. From the very beginning, there were no secrets. This business has been so sullied by slime-ball producers who lie and finagle the truth. It’s tough because you’re following in their footsteps.

Did you get one break that was the turning point in your career?

Macy: One time in one of our classes, Dave Mamet who’s sitting back there, said that the myth is that you get a big break and have to capitalize on it, but that’s not true because you could get lots of breaks and you have capitalize on each of them. It’s a tough business and a tough way to make a living. Of course, if you get nominated for an Oscar that helps a lot. Thanks Dave. I’ll pay you back some day.