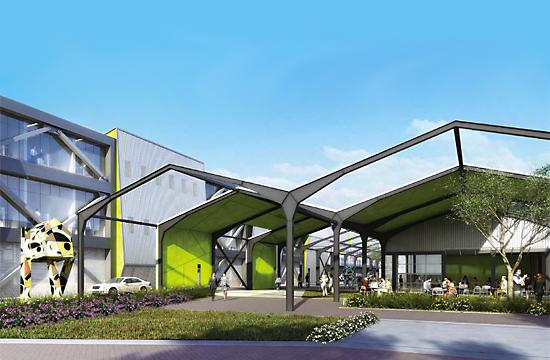 The biotech company Agensys received the go-ahead as part of the multi-step process toward building a new research and development facility on City-owned land adjacent to Bergamot Station in Santa Monica.

The Planning Commission unanimously approved the almost 154,000 square-foot building at 1800 Stewart Street despite bicycle advocates disapproval of the plans to forgo a bike path on the grounds.

Prior to this latest approval, the commission sent construction plans back to the company for further review with a request to find a way to include a public bike path through the property, which was envisioned to connect the future light-rail Expo Line stop to Michigan Avenue for cyclists. Agensys, a Santa Monica-based cancer treatment research company, failed to conjure a feasible path citing safety concerns for both bicyclists and pedestrians. Even avid supporters of the path trounced the idea, instead looking to alternatives to assist cyclists in the industrial area.

Project planners countered that cyclists can walk bikes safely across the property, instead of routing bikes through the parking lot or across busy pedestrian crossways as otherwise proposed.

Commissioner Jim Ries expressed flexibility for the plans to keep the company in Santa Monica despite the bike path issues, a sentiment shared by commissioners and community members alike.

The company is in the final stages of the development agreement with the City, hoping for a quick vote at the Sept. 14 City Council meeting for construction to begin. Plans must be approved by Sept. 28, according to an Agensys representative.

Agensys has agreed to pay more than $70,000 to improve bike access to Bergamot Station and a pedestrian walkway across the property. The money could be used to study an alternative path connection, planners said at the meeting.

As part of the master plan to reconnect Santa Monica as a sustainable city, a proposed network of bicycle paths running across the city may be built in the coming years. Bicycle advocates pushed for the Agensys project to keep with the future plans, but City officials did not want to force the company to leave town on a technicality.

Commissioner Hank Koning said the solution lies in the City’s master plan, through the City yard that is adjacent to the Agensys grounds, not in a path through the facilities. The company also offered multiple public options such as a café and sculpture garden. The grounds also offers publicly assessable “passive open space” for people to use for reading, walking, and general enjoyment.

Commissioner Gerda Newbold said, “when the Expo opens, you can get off your bike and walk, just like you have to get off and walk around bus roads.” Newbold said the plan is not streamlined enough to require a path on the grounds.

Commission members used the projected Expo Line bike path that will go along Olympic Boulevard as a possible alternative. More than one Santa Monica resident called the alternative a “large detour” and compared the Bergamot Station route to the volume of pedestrians to the beach bike paths in Santa Monica.