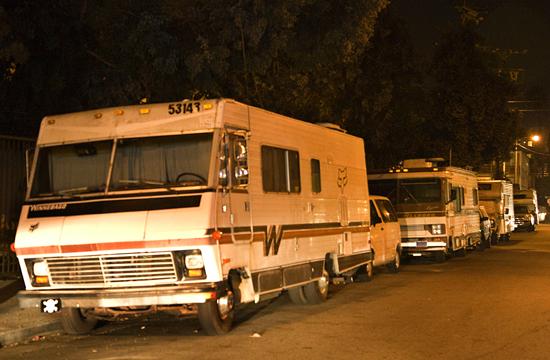 The Los Angeles City Council, reacting to repeated complaints about RVs parked on residential streets in Venice, took action on September 22 by ordering the City Attorney to draft an ordinance banning overnight parking for RVs in Venice.

The emergency ordinance would ban vehicles that are longer than 22 feet and taller than 7 feet to park from 2 a.m. to 6 a.m. between Beach and Lincoln Boulevards south of Rose Avenue.

The ordinance was a reaction to reports that RV residents have been dumping trash and human waste on the streets.

Councilman Bill Rosendahl, whose district includes Venice, voted in favor of the ordinance. Rosendahl had received numerous letters and petitions from Venice residents who were fed up with what they alleged were sanitation and noise issues stemming from people living in vehicles parked on the street.

The Coastal Commission has twice refused to implement city-backed restrictions on overnight parking in the coastal zone. Rosendahl has been seeking an alternative solution to the need for space for resident-occupied RVs that would involve the creation of short-term campsites where RVs could be safely parked, with sanitation facilities and a program to help RV dwellers transition to housing.

At the September 21 meeting of the Venice Neighborhood Council, the night before the LA City Council’s vote, several RV residents spoke of their situation. They included a man who said he had been formerly employed by the film industry, and another man who was unemployed while his live-in girl friend was working. These speakers said that they simply did not have enough money to pay rent, that they did not want to be in the situation they found themselves in, and that they were not trying to create a nuisance.

A vote on the ordinance is scheduled in the weeks to come.