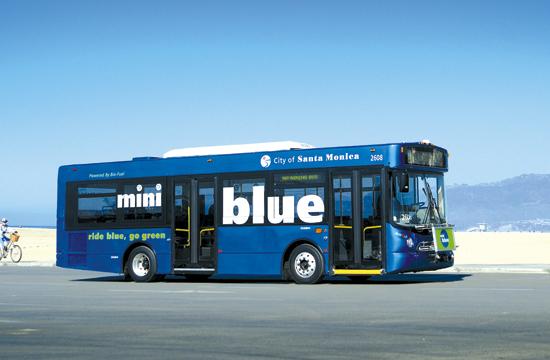 Parking citations and digital ads on buses are just some of the suggestions made to the Santa Monica City Council to financially support the Big Blue Bus (BBB) set for a budget deficit within three years.

The council implemented a fare increase a month ago that will resolve the budget imbalance only until 2013. Reluctant to rely on further fare increases city staff researched funding alternatives, finding five options.

Innovative digital advertisements boards may appear on the sides of 25 city buses, about an eighth of the fleet, to raise funds. The City can get a potential $12 million a year if Santa Monica gets approval from Sacramento to install the signs.

Council member Richard Bloom said he is hopeful City lobbyists will be able to get approval from the state legislature on the issue. He promoted the outside ads, dismissing any plausible revenue from Council member Bob Holbrook’s suggestion of announcing ads inside the bus.

Another option included increased parking citations is another option, which is not recommend by City staff. Still, the council debated the controversial issue at length.

As tempting as it might be, council member Gleam Davis said she rejected higher citations despite the rate hike being the only viable, short-term revenue alternative. McKeown cautioned the council to “think big” instead of turning to easy options. Both he and Davis agreed fines had reached maximum penalties.

Mayor Bobby Shriver instead opined increased parking meters around the city, comparing the $2 an hour meters in Brentwood a mere $1 an hour in Santa Monica. For many residents and workers in Santa Monica alluding to cheap parking in the City is absurd.

Santa Monica resident Denise Barton chastised the dais for asking for locals to pay increased citations, in addition to the BBB funding obtained through taxes. She said the floundering transit is doing nothing to solve the obscene congestion and limited parking.

As parking issues are reaching a boiling point, yet another funding ploy City staff turned to are employers providing transit passes for employees.

A simple yet imperfect solution considering many opt for the “2-hour shuffle” in which downtown employees move their car every two hours in the free parking lots to avoid citations.

Shriver promoted the employee transit program as well as offering transit for college students in order to start habits early that will continue later in life. Gleam agreed with Shriver citing passes as a funding option that actually encourages ridership.

Other long-term alternatives include transit oriented development (TOD), which supports BBB through development agreements to redesign plots with developers that encourage mass transit and give transit revenue in exchange for lease agreements. A similar option is implementing flat fees on new developments to support transit services.

Despite differing views, all members can agree that funding needs to be solved for the City bus services in the coming years in order to preserve what activist and City Council hopeful Jerry Rubin calls, “the best deal in town.”