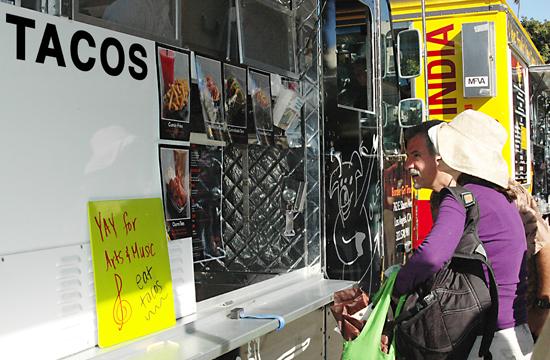 Food trucks claimed a victory in Santa Monica with a temporary suspension on the 30-minute parking limit for mobile food vendors.

Bayside District Corp., a downtown management and promotion group, announced plans this week to appeal to the City Council to get a temporary ban on all food trucks from Fifth Street to Ocean Avenue and Colorado Avenue to Wilshire Boulevard.

The food trucks phenomenon has seen the number of licensed vendors jump from 33 to 117 in just two years in Santa Monica. Some now offer indoor seating or delicacies from professional chefs with even retailers going mobile. The Food Network even featured a reality series with a food truck race across the country.

The move to abolish the parking restrictions comes after the SoCal Mobile Food Vendors Association, boasting a membership of 92 vendors, fought a parking citation in August issued by Santa Monica to one of their members for disobeying the 30-minute time limit. This is the first citation of this type issued to a SoCal member.

The 30-minute parking for food trucks had been part of the requirements for securing a permit to operate in the city. State codes prohibit vendor parking restrictions except for in the case of public safety, an argument that won the truck’s case. The citation and restriction were found invalid in court.

The city of Los Angeles revoked a similar time restriction on mobile food vendors after SoCal challenged the ordinance.

The Santa Monica city attorney issued a suspension this week on the permit restriction citing the need for more time to research the issue and discuss options with the Santa Monica City Council.

Sgt. Jay Trisler said all enforcement of 30-minute time limits have stopped until further notice from the City. He said most vendors have been compliant in Santa Monica when trucks were advised about the limit in the past.

Mobile food vendors, including gourmet or run-of-the-mill food trucks, will be treated the same as any regular vehicle that must comply to parking limits according to city zoning.

Bayside CEO Katheen Rawson said she plans to send a letter on behalf of the group to the city requesting a ban this week. She said by not paying the same cleaning and maintenance fees that reinvest in the downtown community, mobile food vendors are taking an unfair advantage.

“It’s important that we let the City know, the business community is feeling overwhelmed and over burdened by the phenomena,” Rawson said. “Merchants downtown work hard to promote their business and make sure businesses are successful, because a working economy is very beneficial to Santa Monica.”

Food trucks have been accused of causing a safety hazard by blocking the view of the traffic for pedestrians crossing the street, Rawson said, so Bayside is identifying a public concern. There are many alternatives for the City to explore in terms of restrictions, she said.

SoCal Mobile Food Venders Association co-founder Matt Geller, a product of Venice with extensive history in the restaurant business, said allegations that mobile food vendors do not have high costs is invalid. Citing the more than $6,000 fee to rent and park food trucks per month, not including worker’s compensation and insurance fees, he said the entrepreneurs are not running a cheap business.

“Any time you have a change in industry they didn’t want to have to compete,” Geller said. “Consumers having a choice is a good thing.”

Santa Monica approved mobile food truck lots this summer that gives property owners the option of hosting multiple vendors on private property. The Victorian located in Santa Monica hosted the first approved lot on Tuesday night, a day of the week known to be void of a reliable stream of customers.

Food trucks are now not just a staple but a main event for area festivals.

Mobile food trucks attract followers by advertising their location on social network sites such as Twitter or Facebook. Geller said the member association has more than 82 trucks and is growing, with tens of thousands of followers online. This fan base will bring new faces to areas such as Main Street, he said that may be slow during the week.