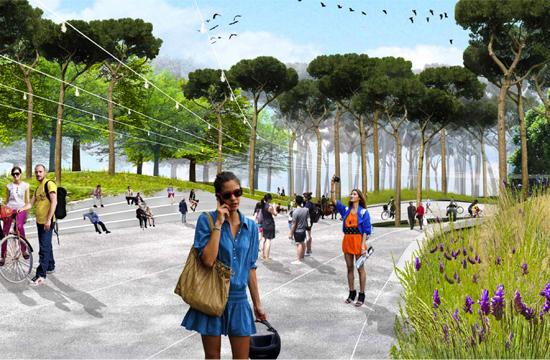 Residents got their first glimpses of potential designs for the future seven-acre public park, Palisades Garden Walk and Town Square, set in the heart of the Civic Center grounds connecting Santa Monica City Hall to the ocean, at a community workshop Sunday, Sept. 19. The City’s planning and the parks and recreation commissions also convened at this workshop, along with many City planners, all of whom met with over 100 residents to discuss three design plans for the City park.

The town square will be located on an acre in front of the City Hall bordering Main Street, connecting to the garden walk that will cover six acres up from the I-10 freeway to Olympic Boulevard spanning to Ocean Avenue.

Design consultant James Corner of James Corner Field Operations, a New York-based design company, presented conceptual park designs. Based on feedback from the first of these community workshops, Corner’s design focused on civic engagement and sustainability as the top functions of the parks. He explained as the “heart of the city,” the highest use for the area will be lounging, picnicking, sitting, and vista views.

Corner said the entire plot will take three to four minutes to walk, large but not big enough to “get lost.” The comparative size of the Santa Monica Pier will only be about two-thirds the area of the proposed park when it is finished, Corner said, or about the same size as Millennium Park in Chicago.

The workshop followed a community outreach and open house on July 24 where comments were obtained from over 200 residents and 435 surveys on specific expectations on the anticipated open space. Feedback has been solicited on a range of topics including park uses, park themes, challenges, opportunities, and the site.

The three concept park designs presented on Sunday all share similarities Corner said, with each being an “interpretation of Santa Monica nature.”

• The Arroyo Wash design focuses on largest open spaces with meandering paths that flow to the current Palisades Park. Cable trellises will connect from the City Hall above the high tree canopies offering lighting and an architectural statement.

• The Arroyo Dune, although admittedly not named for the natural sand formations, is a complex park with the most shade due to the varied range of tree canopies and seasonal, textural and draught tolerant vegetation. Social spaces are carved throughout the “botanical collection” to create many nooks and crannies.

Many residents expressed the need for open space at the meeting, as well as a thoroughfare for people to get downtown safely. Maintenance of the grounds will also be a main issue in terms of budgeting the $25 million City project.

Residents spoke in small groups (with City representatives interspersed within) discussing project details and personal expectations. Opinions were plentiful. Judith Meister expressed the need for a path for Ocean Park residents, while many other people expressed concern for security measures to be evaluated. Valerie Griffin, chair of the Wilmot Coalition, said the wash design reminded her of living near the river as a child, one of her most cherished places.

Corner encouraged residents to remember maintenance cost and feasible public safety measures when discussing the designs. “It is one thing to build a nice park and another thing to make sure it’s maintained,” Corner said.

The park has potential to connect over to Colorado Avenue, he said, if and when the I-10 freeway is capped.

The next step will be to present the designs with the joint committee meeting and community input to the City Council on Oct. 12. Planning and redesign will continue at a Preferred Design Direction meeting on Nov. 13.