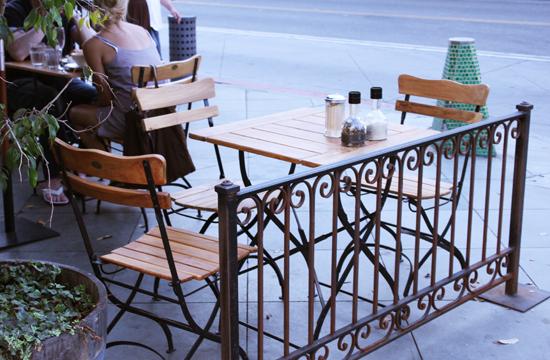 Restaurants across the city may see a spike in rent thanks to a proposal to increase costs for outdoor patio spaces that encroaches on the public sidewalk.

Currently outdoor patio space rates for businesses are anywhere from $1.90 to a mere 79 cents a square foot per month. A discussion between the City’s economic development manager and Bayside District Corp., which represents downtown businesses including many of the restaurants that would be affected, resulted in an suggested increase up to $6.25 a square foot per month for the Third Street Promenade and Ocean Avenue.

Other city districts would be affected, although the rates would vary and have not yet been examined. In all instances, rent would be based on the type of seating, with highest costs for fully enclosed patio spaces down to just a few tables and chairs set out on the sidewalk. With seating out in the public arena, the City shares a financial interest with businesses vying for prudent customers.

The City has been “intending for a long time” to calibrate rates, said Miriam Mack, economic development manager for the City of Santa Monica. Rates are annually adjusted according to the consumer price index from a fixed price last set in 2005. Outdoor dining on Ocean Avenue offers different geographical spaces and has a different value if enclosed out on the sidewalk, she said.

Restaurant owners on the Promenade could pay $6.25 a square foot per month for the fully enclosed patios, $5.67 for partial closure, and $3.71 for railings or open seating.

This is based on an evaluation of the land prices and nothing else, stressed Kathleen Rawson, Bayside District Corp. CEO. Rawson indicated that the preliminary local report of the suggested numbers painted an incomplete picture of the situation, which brought a lot of concerned business owners to her office and “rightfully so.” She said the negotiations on the amounts of the rent increases are far from over.

Certainly now that the City staff started the initial process with the Bayside Land and Assessment committee, she said an alternative can now be explored. Anytime the cost of running a business goes up, Rawson said all effects should be weighed. She said the City has always worked openly with Bayside and the state of the recession is far from forgotten.

“The City shouldn’t under-price their facilities or real estate, but there is a balance of the overall goals of the community, which is promoting outdoor seating as well as supporting businesses,” Rawson said, adding that benefits must be seen from more than a financial aspect.

The City allows businesses to block the flows of pedestrians from walking on busy sidewalks, but it comes at a price. Fees are still under discussion with business associations and within the Manager’s office, Mack said. There isn’t a timeline for proposed rates to reach the City Council where public opinion will be able to debate the effect locally.

“We encourage outdoor dining, it animates the community and takes advantage of the beautiful environment we live in,” Mack said. “It’s a beautiful amenity in the community.”