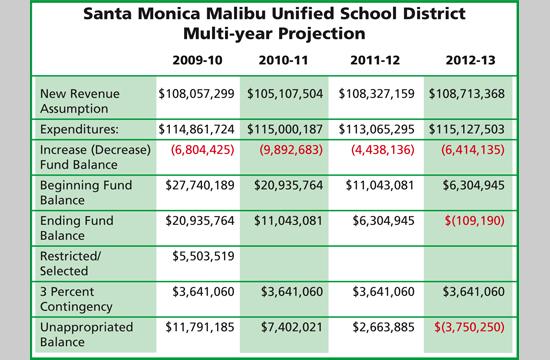 According to the latest projection, even in a best-case scenario, Santa Monica-Malibu Unified School District will have a budget shortfall of more than $3.7 million in the 2012-13 academic year.

The projection assumes that the $108.6 million 2012-13 budget will have an influx of $5 million from yet-to-be-passed Measure Y as well as $2.7 million from the Save Our School campaign and federal jobs funds. The expenditures that year are expected to be $115 million, bringing the budget $6.4 million in the red.

“The important thing is we got ourselves balanced, but we are using our reserves,” said Jan Maez, assistant superintendent and chief financial officer..

The deficit spending is projected to wipe away the three-percent contingency fund in its entirety by 2012-13, Maez said.

Maez presented the information to the school board at its meeting Sept. 23. It was the first time the board was updated on budget projections since it adopted the 2011-12 budget in June.

The budget projections are a “living document,” Maez said, meaning it may be adjusted depending on changes at the local, state, and federal level. As required by law, she will next go over the projections with the board in December and March.

“The reality with the budget is we run into the red,” said board member Oscar de la Torre. “The [Measure A] parcel tax did not pass and we’re thinking another round of $6 million to $8 million in budget cuts. Even with Measure Y, we still have to make cuts.”

De la Torre said the message from the budget projection is that Measure Y must pass or the cuts will be even deeper.

“That state funding has decreased so much and the structural deficit is so big,” de la Torre said, “that only a local remedy is viable.”