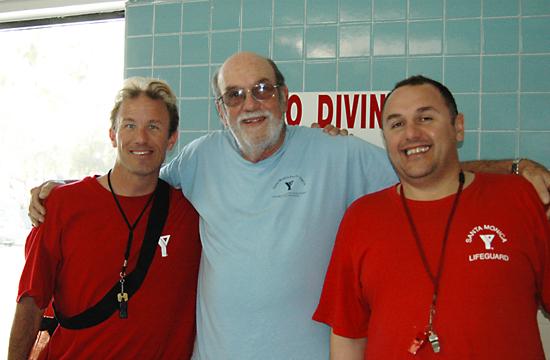 Ron Leviloff, a 75-year-old Santa Monica resident, can be found three days a week swimming laps at the 6th Street YMCA. The grandfather of three will be the first to say that staying active is the key to longevity.

Little did he know these swimming skills would save his life when on Aug. 1 Leviloff plunged off a ferry boat into frigid waters while vacationing in Victoria, Canada.

Despite the chance of losing direction in the churning water or the odds of being sucked into one of twin propellers, he managed to stay above water and wait for help. Witnesses said he never panicked.

He said it all seemed to happen “in the matter of a second.”

Leviloff attributes his calm demeanor and grace in the face of danger to his thrice-weekly trips to the YMCA in Santa Monica where he swims laps. Not one to diminish the strength of the feat, especially for someone in their 70s, he said how thankful he is to have walked away with only a minor scratch.

“It says something about the old folks, we can do it too”

He boarded the Blackball ferry line, a historic 1,000 passenger and 115 vehicle capacity ship, out of Victoria to Port Angeles, Washington. The boat had just left the dock when he decided to head to his car “squeezed” into the parking area to grab a packed lunch.

While exiting his car, Leviloff said a motorcycle fell into him on the rocky boat, knocking him off the edge. He fell 15 feet into the icy harbor. The doors had not yet been closed upon departure, so he was without a guard rail or rope to protect him. He only remembers thinking, “OK, I’m going into the water.”

The ferry still departed without noticing the man overboard.

He treaded water for only about 10 minutes before a Zodiac inflatable patrol boat came to his rescue, throwing Leviloff a life ring,s thanks to observant visitors in the harbor. Rescuers pulled him to shore–– cell phone, glasses, camera and all– giving him blankets to fight off the real threat of hypothermia.

After finding his shaken girlfriend and a quick trip to the hospital, Leviloff received a complimentary stay at the local where he healed his wounds with a “strong scotch.” He went on to continue his trip the next day.

“I’ll have this story to tell for the rest of my life,” he said.

This is the first time that someone has fallen off the boat, according to the Vancouver Sun website. One person was cited for jumping off the boat to avoid customs about 20 years ago, but was caught.

A life-long Los Angeles resident, Leviloff said he stays young with an active lifestyle along with “good genes.” (His uncle will be 99 years old in October.)

He expressed deep gratitude to his trainers at the YMCA for teaching him swimming strokes and to “push yourself that much more” in order to stay healthy. This training taught him to keep his mouth closed and hold his breath when in the chilly harbor, a downfall to many panicked swimmers.

A self-proclaimed avid traveler, he said driving up to the Pacific northwest is one of his favorite get-away spots thanks to the pristine beaches. This trip he spent 15 days travelling, stopping in Seattle before heading to Canada. He did admit reluctance to driving onto a ferry any time soon.