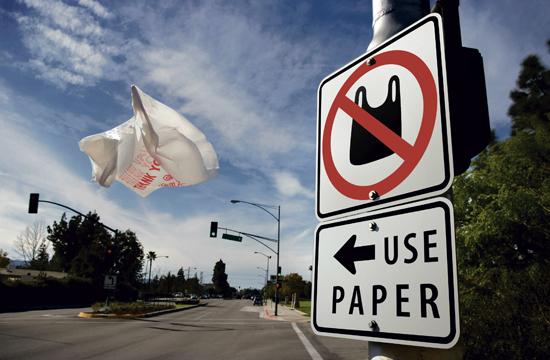 California lawmakers rejected a bill aiming to ban plastic shopping bags in the final hour of the legislative session, after a bitter debate and millions spent in opposition by bag manufacturers.

Like many other powerful players in California that had little faith in plastic bag bans on the state level, Santa Monica city officials had already announced their plans to enact a similar citywide ban before Assembly Bill 1998 was even voted on. The bill received just 14 votes in the Senate, seven short of the majority it needed.

AB 1998 would ban single-use plastic and paper bags from supermarkets, liquor stores, and other small food stores, including pharmacies, by 2013. The bill was either going to be rejected or sent to the governor by midnight Tuesday Aug. 31, the last day of the legislative session. California would have been the first state in the nation to enact such a ban. Governor Arnold Schwarzenegger publicly supported the bill.

“A growing list of counties and cities are moving ahead with bans on single-use plastic bags, and California should show its leadership on curbing plastic pollution,” said Mark Gold, executive director of Heal the Bay, who sponsored AB 1998. The organization has long sought to eliminate plastic debris, a major pollutant in the ocean.

On Oct. 12 the Santa Monica City Council plans to discuss a proposed ordinance on single-use plastic bags at all retail outlets. It also will create a Green Fee for each paper bag distributed by grocery stores, convenience stores, and pharmacies in the city. Restaurants would be exempt from the ban, allowing them to provide plastic bags for take-out food.

“This is a sad day for California,” Brownley said. “It’s not a matter of if, but a matter of when consumers bring their own bags and become good stewards of the environment.”

Critics do say that the money is not enough to stabilize manufacturing jobs. Instead the state should focus on current recycling programs to reduce bag litter.

The American Chemistry Council, which represents plastic bag manufacturers ExxonMobil Corp. and Dow Chemical Co., promotes recycling the bags with convenience bins placed at markets. Advocates say plastic bags are a small portion of the litter issue and a ban will not be effective, according to the website savetheplasticbag.com. The argument says nothing of the up to 1,000-year life span of the seemingly disposable item.

Millions have been spent in opposition to the bill in an unprecedented campaign by the ACC, according to Brownley. She spoke of being a leader to surrounding coastal states at a press conference at a downtown Vons grocery store on Sunday, Aug. 29.

Brownley attests that only “five percent of single-use plastic bags are recycled.”

“Single-use plastic bags are a burden to our oceans, our beaches, our economy, and the cleanliness of our city,” said Santa Monica City Council member Terry O’Day. “Other communities have proven that eliminating plastic bags is sensible.”