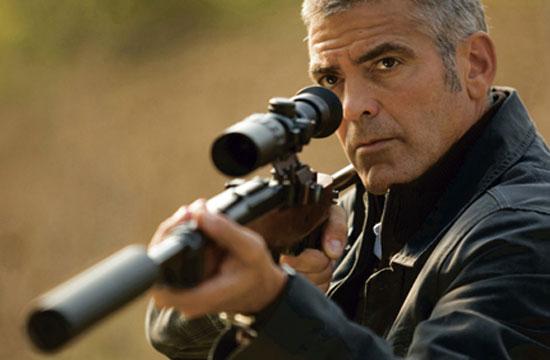 “Don’t make any friends, Jack; you used to know that,” says Pavel (Johan Leysen), concluding a short list of directives to his underling – a smoldering assassin played by George Clooney – in the early minutes of the so-called new thriller, “The American.” We know from the moment the rules of play cross the stony-faced boss’s lips that Jack (Clooney) is going to break them. Therein lies the main problem with the film: Predictability.

Stock characters and creaky symbolism are additional problems of director Anton Corbijn’s slow-paced trek through the Italian countryside, and these cinematic flaws are not eclipsed by Clooney’s good looks and A-list cred. If you’re fond of cinematography that favors dwarfing humans against sprawling landscapes for purposes of emotional detachment, however, you’ll be satisfied.

At the outset, Jack, whose killing skills are augmented by his knack for custom gun-making, flees Sweden for Italy. Upon arrival in Rome, Jack gets word that Pavel has a job for him, which Jack later decides will be his last hurrah in a life of crime. Holing up in the mountains of Abruzzo, Jack tackles his weaponry crafting task, and proceeds to break the cardinal rule of Pavel almost immediately. Not only does he make friends, but he makes friends with a priest (Paolo Bonacelli) and a prostitute (Violante Placido). And guess what? The priest turns out to be less than virtuous, while the prostitute has, you guessed it, a heart of gold.

As Jack tinkers with munitions and wrestles with his emerging decision to choose love and freedom over crime, profit and isolation, Rowan Joffe’s screenplay — adapted from Martin Booth’s 1990 novel, “A Very Private Gentleman” — dissolves into cliches and didactic monologues. It’s as if each scene in the middle of the movie is an infomercial for some ‘Very Important Life Lesson.’ “All men are sinners,” Jack tells the priest. “You’ve lost your edge,” Pavel tells Jack. “You have a secret,” the prostitute prods Jack. Holy gods of dialogue, help us.

Between these flat exchanges, Clooney broods and frowns, forcing his face into an emotional telegraph device that succeeds in telling us the same thing over and over again — “witness my angsty frown, I no longer want to exist as a crafty assassin, but am unsure how to escape the only life I know!”

If you haven’t figured out the ending yet, I’m not going to insert a spoiler here. Let’s just say there are violins involved – swelling, crescendoing violins.