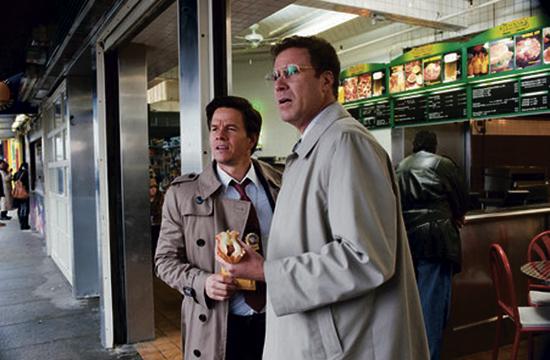 In the movies, there are police officers who boldly fight crime in the manner of indestructible superheros, engaging in heart-stopping, high-speed pursuits, and exchanging gunfire with the bad guys while maintaining all the nonchalance of children trading stickers. And then, there are the other guys, those bumbling desk jockey cops with zero guts and glory. Those misfits take center stage in “The Other Guys,” the latest comedy from director Adam McKay, who wrote the similarly sophomoric “Step Brothers.”

Pairing Will Ferrell and Mark Wahlberg as mismatched partners in crime is a stroke of cinematic genius that produces comic gold in this spoof of the shoot-’em-up caper motif.

N.Y.P.D. detective Allen Gamble (Ferrell) loves nothing more than examining data and pushing paper. He’s a tool of the first degree as evidenced by his love of easy listening music and his awkward anecdotes (“At age 11, I audited my parents, and believe me, there were some discrepancies”). Gamble’s partner, Terry Hoitz, is quite the opposite, a man seething with anger and rage who feels cooped up by his desk assignment, which he got after inadvertently shooting Derek Jeter.

When Gamble and Hoitz stumble on a huge money-laundering scandal, the two set out to become the newest, tough guys in the department. Hoitz dreams of stepping into the huge shoes of the recently deceased cop duo of Christoper Danson (Dwayne “The Rock” Johnson) and P.K. Highsmith (Samuel L. Jackson), the coolest, baddest, most respected policemen in town who ate it in the line of duty. The eternally jittery Gamble has lesser dreams; he simply wants to get out of this investigation alive.

The contrast between the brainless brawny guy and the overly analytical dweeb is the heart of the comedy here. Wahlberg lets his crazy flag fly as a bloodthristy egomaniac who would rather shoot than think. Ferrell masters the wussy-boy role with complete conviction, supplying plenty of triggers for the Wahlberg character’s rage (when Hoitz takes his first ride in Gamble’s Prius he notes, “I literally feel like I’m inside a vagina”).

The supporting cast supplies additional guffaws, with Johnson and Jackson nailing the film’s opening sequence by showcasing an overabundance of bravado and impossible survival skills. Eva Mendes plays Gamble’s unlikely wife, a woman who Hoitz describes as “smoking hot” and whose love of Gamble baffles Hoitz. Michael Keaton rounds out the laughs as the chief of police who moonlights at Bed, Bath and Beyond.

It’s pretty much a laugh-a-minute movie that favors good, old-fashioned, comedy team silliness over lewdness. There are blips of potty humor thrown in, but it’s more about a couple of bumbling chumps prevailing over evil.

Rooting for these hapless lawmen is a blast. The closing credits creatively reinforce the film’s message—that the little guy can beat the big cash-mongering criminals—with charts and figures about money lost in some of the most infamous Ponzi schemes and Wall Street rip-offs