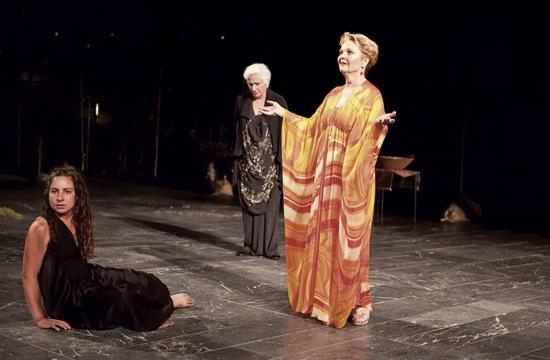 The tale of the cursed family of the House of Atreus is one of the most popular themes in Greek myth. Of the many dramatizations by Greek and other playwrights, Sophocles’ version of the myth, “Elektra,” is considered a masterpiece. This play, directed by Carey Perloff, and translated by Timberlake Wertenbaker, is being presented at the Getty Villa in the manner of the ancient Greeks-in an outdoor amphitheatre, with the main Getty Museum building representing the palace of the family of Atreus.

The story treats of revenge and the inability to forget the past. It is several years after the death of King Agamemnon at the hands of his wife Clytemnestra. Elektra, their daughter, lives in a state of perpetual mourning for her father and constantly gripes about her need for revenge. She hates Clytemnestra and her lover Aegisthus and cannot abide the thought that they are enjoying themselves in her father’s bed. (If this makes Elektra sound a bit like a female Hamlet, it’s probably not a coincidence. Shakespeare was doubtless familiar with the story). But Elektra, a woman, is not supposed to carry out a plan of revenge. She wavers between vows to take action, and admonishments by her conciliatory sister Chrysothemis. Her hope is that her brother Orestes, whom she had sent away with a tutor/guardian for his own protection, will return to help her put things right.

Central to every Greek drama is a chorus which represents the community. The chorus in this production is embodied as one woman, stage and screen veteran Olympia Dukakis, whose arresting voice and maturity establish her as both social conscience and as a friendly concerned matron who tries to soothe and counsel the troubled Elektra. Accompanying Dukakis are Sharon Omi as a vocalist who proclaims in Greek, and Theresa Wong, a cellist, who provides musical “commentary.” This innovation works much better for modern audiences than the speeches given (or originally chanted) by a group chorus.

Annie Purcell has a challenge in the role of Elektra. The character can easily come across as simply whiny. Purcell finds Elektra’s reserve of strength as well as her perhaps unintended humorous moments. One can see the parallels between Elektra and another of Sophocles’ nobly doomed heroines, Antigone. While Elektra’s actions are not as overtly political as Antigone’s, Purcell hints at the assertive nature that might have given Elektra a different kind of life in a different situation.

Pamela Reed, as Clytemnestra, wraps her obvious evil in a deviously charming exterior. Manoel Feliciano, as Orestes, gets into the action rather late in the play but gradually gives shading to his somewhat mysterious character. Jack Willis, as the tutor, creates a wonderful character whom one wishes could be a “sidekick” in another kind of play. His description of a tragic accident at a chariot race is vivid enough to give every audience member their own mind’s-view of the incident.

But Dukakis is the performer that most people will remember if they see this production. She is the asker of the questions that we might all have if we knew this family and if we were worried about Elektra. Above all, she exudes a maternal understanding that suggests that she is Elektra’s mother-surrogate.

Elektra runs through October 2 at the Getty Villa at the J. Paul Getty Museum.