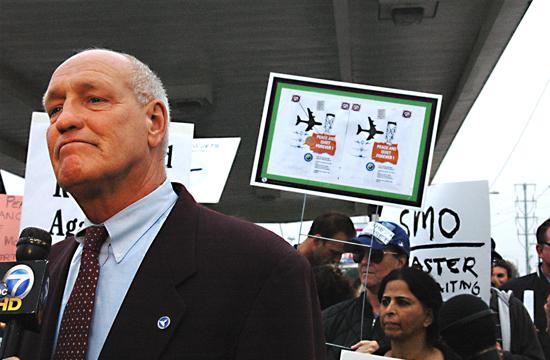 To celebrate a four-day closure of Santa Monica Airport (SMO) Westside residents gathered for a “Peace and Quiet” vigil on Sept. 20 from 5 to 7 p.m.

All aircraft operations stopped for runway maintenance starting Sunday, Sept 19 at 9 p.m. until Friday, Sept. 23 at 7 a.m. West Los Angeles neighborhoods, including the outspoken residents in the Sunset Park and Ocean Park neighborhoods in Santa Monica, were momentarily free from the constant flights to and from the bustling airport.

“We want residents to imagine a future for the Westside where peace, quiet and cleaner air is possible, not just for a few days, but permanently,” said Concerned Residents Against Airport Pollution Cofounder and Director, Martin Rubin. CRAAP sponsored the vigil.

The vigil, which felt more like a protest and was anything but quiet, brought about 50 people bearing signs to the northwest corner of Lincoln Boulevard and Rose Avenue in Venice on Monday. For two hours residents waved anti-SMO signs to passing cars and mingled with neighborhood leaders while government officials spoke to the press on the busy intersection.

McKeown spoke against the negative impacts on the residents and lauded the vigil while protesters waved signs behind him for the cameras. McKeown, who is running for reelection, joins fellow candidates Susan Hartley and Robert Kronovet in the call to close the airport or reduce the amount of large jets traffic.

Rosendahl, a long dissenter of the airport who frequents such protests, called for the closure of the airport while speaking for residents who have had enough. “This is the time,” he said to the emphatic crowd, “to end the pollution and noise that have plagued the neighborhood.”

Following the FAA tested change in flight path that sent planes flying over neighborhood homes in Santa Monica, residents have publically deplored the notion that the tested path could be made permanent by the agency.

The FAA claims the new flight test separated traffic patterns and reduced planes idling at Los Angeles International Airport and SMO. Rosendahl supports the test that reduces the amount of airplanes flying over his district’s constituents.

Cameron Rath who has lived near Penmark Golf Course his entire life said sending planes into Santa Monica will not solve the problem. He supports turning the airport into a large public open space, but is realistic that the current concern is getting residents to work together against the problem. He said the wrong mentality of residents is “we need to make it someone else’s problem, get it off my table.”

Thirty-year Santa Monica resident Michael Stenger, who waved a sign for “closure of flight schools,” didn’t call for removal of the airport but said large business jets are just too much. Living near Penmark Golf Course, Stenger saw firsthand how flights increased over the years changing a small commuter airport into a destination for the wealthy and influential.

Concerned about the increased pollution as well, he said exhaust leaves black specs all over his lemon trees.