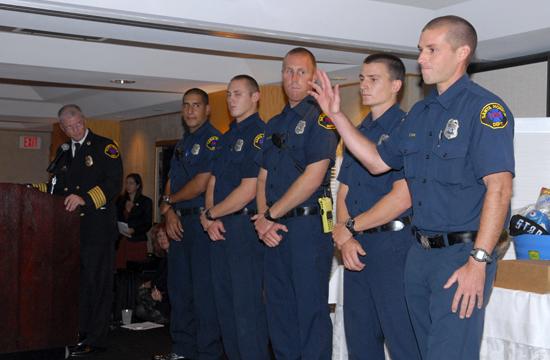 New educators, firefighters, and police officers were welcomed to the Santa Monica community with gift bags and raffle prizes at the Santa Monica Chamber of Commerce’s 16th Annual Heroes Celebration. The celebration took place at the Le Merigot Hotel and Spa on October 19.

The Santa Monica-Malibu Unified School District (SMMUSD) hired 26 new people this year. Superintendent Tim Cuneo noted in his remarks that “so many new employees were hired because they are filling the positions of those who have retired or left the district.” Some key new personnel included the Assistant Superintendent of Human Resources, principals for John Adams Middle School and Will Rodgers Elementary School and two house principals for Santa Monica High School (SAMOHI).

Also introducing his new personnel was Fire Chief, Scott Ferguson. He too commented on the high educational achievements of his new hires by noting some of the five new fire fighters already had their B.A.s while the others were working on them.

New this year was the inauguration of the First Annual Inspirational Hero Award which was given to honor the memory of Norm Lacy. Lacy, a former Samohi Football coach and (at the time) was the Athletic Director, unexpectedly passed away earlier this year from a heart attack. He also had been the head football coach for Saint Monica’s High School from 1991 – 1999. Carlthorp School’s Vice-Principal Tim Kusserow broke down in tears several times as he discussed Lacy’s many achievements in Santa Monica. Kusserow had a difficult time controlling his emotions because Lacy had been “a second father to him.” Lacy was honored because of his “devotion, commitment to our community, and his professional accomplishments as an educator and as a football coach.” Lacy’s widow, Patty, tearfully accepted the award.

Also honored was the Executive Director of the Santa Monica-Malibu Education Foundation, Linda Gross. She was instrumental in helping to raise $1.5 million in 60 days through the Save Our Schools campaign which helped the district retain a number of key programs and reduce its lay-offs.

The Chamber’s Education Committee puts on the event every year to “support excellence in education and promote meaningful business/ education partnerships with local public and private schools.” Leaders from the education community, the Chamber, the Santa Monica-Malibu Unified School District (SMMUSD), and the PTA make up the committee. More information about this committee can be found at www.smchamber.com.

The gift bags and raffles prizes were donated by local Westside businesses that are Chamber members.