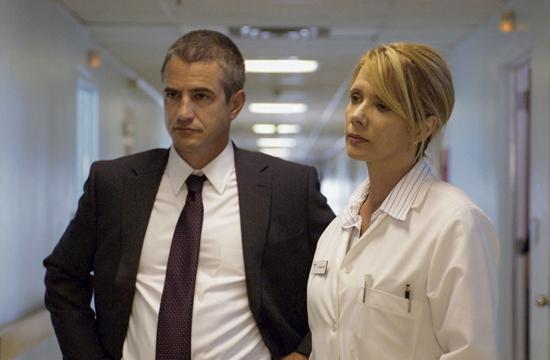 Dermot Mulroney started his film career making movies for television in 1986, moving on to the big screen in 1988 in “Sunset,” starring Bruce Willis and James Garner. Since then, Mulroney has been featured in dozens of films including two films with a wedding theme – “The Wedding Date,” co-starring Debra Messing and “My Best Friend’s Wedding,” co-starring Julie Roberts and Cameron Diaz. His latest film is “Inhale,” is a gritty, dark film dealing with the trafficking of human organs in Mexico.

(The following interview, which comes from a recent press conference that a most charming, relaxed, and forthcoming Mulroney attended, has been edited for print purposes)

Mirror: How did you prepare for this role? Did you research illegal trafficking of human organs?

Mulroney: It’s interesting. What people refer to today as research is really just “Googling.” It used to be you had to go to the library, but yes, I Googled it, and found out as much as I could, if that’s what you mean by research. There are plenty of stories on this subject, but it’s never been on the front page of let’s say the Santa Monica Mirror. That said, as an actor, it becomes much more about imagination and the creative process.

Mirror: What do you think is the purpose of this tough film?

Mulroney: It wasn’t our goal to turn it into a front-page story nor did anyone set out to increase awareness of the problem. It was a good way to tell the story showing how my character faces danger and the intense moral dilemma with which he and his wife are confronted in trying to save their dying daughter. It’s one thing to try and jump the line on the normal organ donor process, but this story was drastically different because it was about murdering people and harvesting fresh bloody organs from a body and selling them. It’s a pretty provocative story line.

Mirror: Did you ever know a really sick child and did the script touch you personally?

Mulroney: I have kids, but none of them, thank God, has ever been sick in a drastic way, so I had no personal experience on which to reflect other than being a father and being related to lawyers (father, sister, and brother), which I think is a stretch. On page one of the script, I launched into ‘how would I feel if…’ which is the actor’s job. What’s fascinating about acting is that you put yourself in someone else’s shoes.

Mirror: What was the most difficult scene for you?

Mulroney: The most difficult scene was shot in the basement of a strip club. The sequence where they force a bottle of Tequila down my throat, which is really soda and water, was like a near-drowning experience. I knew it was going to be uncomfortable, but it was very unpleasant. I think that scene will be very memorable for audiences as well because of the beating my character takes.

Mirror: What was the most striking part of the story?

Mulroney: It’s how the movie ends because it doesn’t end. There was a time when movies were allowed to have an oblique ending, where you leave an unanswered moral question. That is one of the most compelling elements of this movie. When I finished reading the script, I thought wow, did he really make that horrific decision and what would I have done in that man’s shoes. You hope as an actor you are able to draw out the character in such a way that his actions make sense as he’s so far away from what a normal guy would do in his desperation to save his daughter’s rapidly-ending life. Also, each of the other characters add to the uncertainty of the situation as the good guys turn out to be bad guys, and the bad guys turn out to be sort of good guys.

Mirror: Sam Shepard was wonderful as the tough-as-nails prosecutor with a deep secret. Can you talk about your relationship with him?

Mulroney: Our paths seem to cross on a regular basis. I worked with Sam when I was 22 and he was 42 and again about ten years later, in a film he wrote and directed, “Silent Tongue,” a weird, beautiful movie starring Richard Harris and Alan Bates.

Here’s the deal with Sam. (laughs) He was never very nice and now he’s unbearable. He’s a very intimating person, but not to me, which is why I can speak freely about him. We’re actually friends and see each other every seven years whether we like it or not. He’s grown crotchety over the years for sure. The director, Baltasar Kormakur, is a big, handsome, powerful guy and even he was quailed a bit because Sam is such a forceful person. While everyone else was saying ‘Yes Sam, right away sir,’ I was saying ‘Sam, would you please knock it off…’ He’s working a lot lately, which is good, because if he stops working, he’ll live by himself in a cabin where he’ll write and kick his dog. (laughs)

Mirror: At what point did you decide to be an actor and what actor had a profound influence on you?

Mulroney: I had been acting and playing music since childhood. Throughout my college years, I tried out for plays, but I never really thought it made much sense to be an actor. I thought it was foolish and that there wasn’t a chance in hell that it would ever happen. In looking back when I was 18 or 20, although I trained and seemed to have a good knack for acting, I wasn’t driven and I think because of being relaxed about it is why it happened.

Early influences are probably the same as they are now. I saw Paul Newman as the ultimate manly actor and was fortunate enough to work with him and become friends. Sam Shepard’s plays were a big influence in my college years and I also admired Mickey Rourke.

Mirror: What don’t people know about you?

Mulroney: I don’t know. There’s not too much to tell.

Mirror: What about the fact that you’re a musician and play the cello, double bass, and play in a band?

Mulroney: Oh I think people know about that. Now, here’s back to this Googling thing. You Google and it tells you everything. And some of you guys (the journalists) have been doing this long enough to remember a time when you actually had to find out about the person. Sometimes I’m asked the same question over and over because it’s number four on the Google list. Actually, there’s nothing to reveal because I’m not really not that interesting.

Mirror: Oh come on. You’re not just another pretty face.

Mulroney: (smiling) No I’m not.

Mirror: What’s the biggest challenge in juggling your roles as father, significant other, and having a career?

Mulroney: I’ve had a lot of time off recently so I have time for my family – toddler classes, PTA meetings, etc. Everyone gets it. Even my mother knows I’m going to call less when I’m working. When I return after a shoot, I catch up with everything like my dry cleaning, my bank account, etc. That’s been my cycle from the beginning. It’s not that hard. Of course, there are some intense times like this morning. I’m in post-production on a movie and am trying to make phone calls to the music editor and be on time for this press conference. Then tonight I have two events, including a charity I support.

Mirror: Which charity is that?

Mulroney: It’s Education Through Music – L.A. It’s basically getting instruments into the schools because that’s where I learned to play and I want kids to have the same musical opportunities I did.

Mirror: Is there a Dermot Mulroney career game plan?

Mulroney: (laughing) Oh you caught me. I wish. Look at it. It’s a mess. It’s all over the place.

Mirror: It reflects your range of talent.

Mulroney: Thank you, but it’s really that my fate is in someone else’s hands and I accepted that a long time ago. As a younger man, I used to think that one day I would get to that point where I would achieve a level of success where I could pick and choose my projects, but here I am 25 years later, and I still don’t know what’s around the next corner. Now I just embrace that and love living like this and really, there’s no moss growing under me.

Mirror: Thanks for a most charming interview.