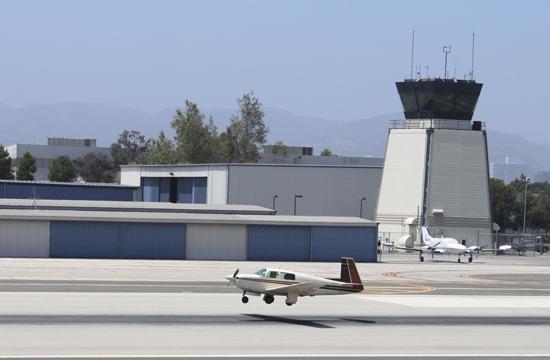 The four-day closure of Santa Monica Airport for runway repairs allowed officials the opportunity for air quality testing during the temporary reprieve for neighboring communities.

The South Coast Air Quality Management District (SCAQMD) left the airport this week after gathering samples for possible air pollutants during a three-week period before, after, and during the closure. The airport closed temporarily for routine maintenance from Sept. 14 to Sept. 19.

Officials tested for spikes of pollutants released during aircraft departures and the long-term remnants of ultra-fine particles or black carbon. This research adds to extensive studies performed from 2006-07 where Dr. Phillip Fine, one of SCAQMD scientists performing the study, said they didn’t have the correct instruments to test for long-term black carbon levels.

Without planes leaving the tarmac the team could separate air pollutants easier from nearby sources such as the well-trafficked Bundy Drive, Fine said.

From the data collected, the group can make feasible mitigating measures in order to reduce pollutants at the airport. Fine said without detailed analysis they won’t know the effectiveness of any specific recommendation.

He said any advice is just one look at a complicated hierarchy of control at the airport, especially in terms of limiting jet aircrafts, which are known to create increased levels of air pollutants. Options such as moving smaller aircrafts further down the runway to give distance to neighboring residents, he said, has its limits.

“All our recommendations come with a caveat on how we don’t want to endanger public safety,” Fine said. Options, such as barriers that may block wind or a glass fences, need to be examined in order to understand the effective size and structure.

The team also put monitors in residences homes, a procedure not normally done Fine said, in order to monitor the types of pollutants that may enter nearby homes. The idea is to look at possible filtration systems as an alternative for homeowners.

Lisa Hughes, an Ocean Park resident homeowner since 2004, said that if planes are flying overhead she wants to know the impact. Hughes is working as part of Neighbors for a Safe and Healthy Community who have joined with State Rep. Jane Harmon and U.S. Rep. Henry Waxman to require an Environmental Impact Report at the airport.

“If the economy picks up then so will the airport and it can’t be good for pollution in L.A.,” Hughes said. “My heart goes out to the people that live near the airport that don’t know what they are breathing.”

She commented on how the neighborhood was so quiet she could hear birds during the airport closure.

SMO Director Robert Trimborn called the study “very exotic and very detailed” in terms of the amount of data collected. He reiterated that any results will take some time to evaluate, seeing that the group just recently published a final report for the previous study from 2006-07. Fine said a brief summary of the results should not be expected until the end of the year.