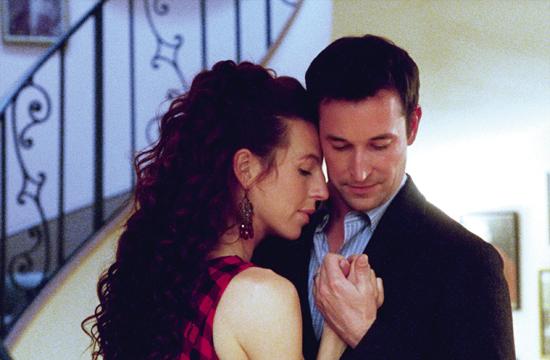 We’ve seen plenty of young Hollywood types – Lindsay Lohan and Paris Hilton leap to mind – break plenty of laws in the last decade, publicly humiliating themselves time and time again. The masses eat up the misfortunes and bad behavior of said celebrities like rabid dogs gnawing on delicious bones. In Henry Jaglom’s new film “Queen of The Lot,” we meet one celebrity whose house arrest and accompanying ankle bracelet are tools she’s counting on to rocket her to fame.

An entirely enchanting Tanna Frederick stars as Maggie Chase, an actress who has achieved a modicum of fame starring in B-list martial arts action flicks. Chase’s desire for A-list fame is of the obsessive kind, and she’ll do almost anything to get noticed. But the beauty of the character is her humanity. Frederick plays the role with such girlish charm that we can’t help but root for Maggie, even as she looks for love in all the wrong places. Maggie’s boyfriend, Dov (Christopher Rydell), for instance, isn’t exactly a gentleman. But Dov’s family is a famous Hollywood bunch, thus her quest for fame is furthered when she spends a weekend at the family’s home. As she is introduced to one famous person after another, Maggie is alternately impressed and shaken, proud, and ashamed. She’s not sure if her ankle bracelet should be a source of pride or embarrassment, but she puts on a smile and keeps her chin held high even as her confidence begins to dwindle.

Enter Aaron (Noah Wylie), Dov’s brother, a failed writer who quickly falls in love with Maggie. Unlike his gambling-addicted, womanizing brother, Aaron is a down-to-earth good guy, a man with whom Maggie might have a future if she finally decides to make a good life choice.

This Hollywood tale is not to be missed, especially by anyone who has ever worked in the film industry. Every self-indulgent whim of the rich and famous gets skewered in side-splitting fashion. Double-fisted cell phone talkers blab during parties, stars seek out paparazzi, and self-righteous life coaches search for screwed up ingénues bearing wads of cash. It’s almost absurd to watch these people operate, and therein lies the humor. But it’s not all laughs – there’s quite a bit of heart to this tinsel town yarn.

“Queen of the Lot” is set for release in November.