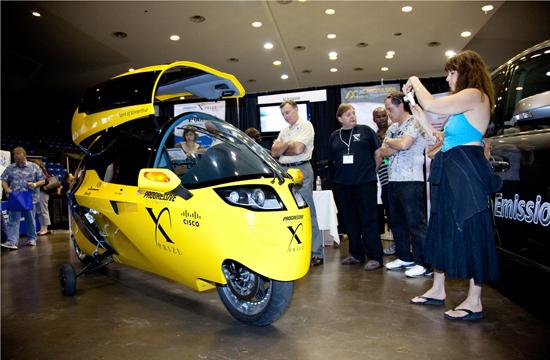 New this year was the increased availability of affordably-priced, 100-percent electric cars for test drives and purchase. Nissan chose the Expo to kick off its countrywide drive electric tour for its Nissan LEAF. This compact hatchback can seat up to five people and will be available starting in December 2010 in Los Angeles. San Francisco, San Diego, Portland, Seattle, Phoenix, Tucson, and Tennessee. This car is powered by a lithium-ion battery pack that is capable of giving the vehicle a 100-mile range with a single charge. The LEAF has a $32,780 Manufactured Suggested Retail Price (MSRP) before tax incentives and 20,000 people have already ordered it on-line for 2010.

Also part of the 100 percent electric car market is Santa Monica based CODA’s five-passenger sedan. This vehicle has a 90 – 120 mile range with a single charge. The range depends on the driver’s driving habits and the road conditions. One of this car’s unusual features is an active thermal management system to help minimize climate effects on the car’s battery performance. There will be limited delivery of this car in 2010. The CODA has a MSRP of $44,900 before tax incentives.

Some of the other electric cars that were part of the Expo were the Chevy Volt and the Toyota Electric Prius. Also on display were electric trucks and motorcycles and vehicles that run on natural gas.

Federal tax credits for electric drive vehicles range from $2,500 to $7,500 depending on the size of the vehicle’s battery. More information on federal tax credits can be found at www.fueleconomy.gov. California rebates of up to $5,000 are also available for Californians who lease or purchase electric, plug-in hybrid electric and fuel cell vehicles. More information on these rebates can be found at www.cvrp.energycenter.org.

AltExpo also included panel discussions on electric vehicles, mass transit, hydrogen fuel vehicles, a tech review and debate moderated by State Senator Fran Pavley, and a behind the scenes look at the Progressive Insurance Automotive X Prize. Shares of this $10 million prize are being awarded in order to inspire the next generation of fuel efficient vehicles.