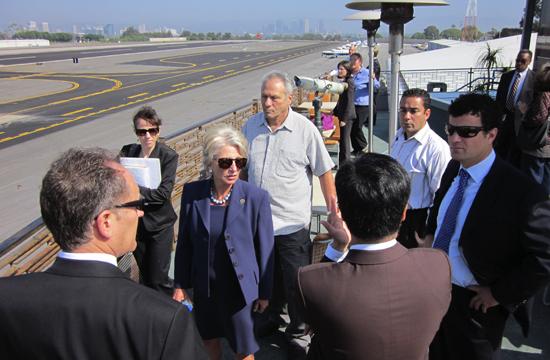 Community leaders opposing Santa Monica Airport met with the Environmental Protection Agency for the first time in an effort to bolster support from the influential federal arm against airport pollution.

Representatives discussed three reports that point toward the harmful effects on public health for neighboring residents of Santa Monica Airport (SMO). With the EPA as a possible ally, area legislatures and activists hope to be able to build a case against Federal Flight Administration rules that allow large jets at the airport.

With homes closer than 300 feet to the airport, issues of noise and air quality are at the forefront of a debate. Three recent reports measured pollution levels and consequently the harmful impacts on public health. The South Coast Air Quality Management District (AQMD) and UCLA reports found aircraft pollution detrimental to residents’ health.

The Environmental Protection Agency has commissioned three studies on pollution from AQMD, with the latest released from 2003-04, to detect and measure levels of toxins in the air, called the Multiple Air Toxics Exposure Study. The group performed the study on the general aviation airports in Santa Monica and Van Nuys, with special attention to lead emitted from propeller aircrafts.

A six-month study by AQMD also reported levels of ultrafine particles found in residential areas. Ultrafine particles are carcinogens that have the potential to penetrate deep into lung tissue and cellular walls that are then carried through the blood stream.

Levels reached up to 600 times higher near Santa Monica Airport than typical air measures, according to the report, including at a residential site located about 330 feet downwind of SMO. To read the full studies visit aqmd.gov and look at the Health Studies section.

“There is no scientific knowledge to say what would be a safe level or not a safe level,” said Sam Atwood, an AQMD representative, in May. Without a general consensus or health standards for the known carcinogen, there are no regulations to protect residents.

A study led by two UCLA Institute of Environment professors indicates that ultrafine particle emissions are 10 times higher than normal 300 feet from the runway where numerous homes border the airport. Levels are 2.5 times higher at a distance of 2,000 feet, which extends concern to residents in Venice and West L.A.

The third report Santa Monica Airport Health Impact Assessment is an academic summary of existing research conducted by UCLA Pediatric residents. Dr. Alma Guerrero, assistant clinical professor of pediatrics at UCLA, explained in an email back in May that such assessments are frequently used to determine the health impacts of public policy and are used to inform policyholders on complex information.

“Hopefully there’s enough there that we will go against the money interests that are so apparently going on here,” said Martin Rubin, co-founder of local activist group Concerned Residents Against Airport Pollution. “Just to the have the EPA on board at this level is very crucial.”

The goal is to create a joint coalition, he said, to force the FAA to instate a safe minimum distance between the airport and its wary neighbors. He said the positive support from the EPA representatives concerning the environmental impacts was very encouraging to the group’s cause.

City regulators and community residents have contested to no avail for a full environmental impact report regarding the airport’s effect on the community. Just this week City staff waged another battle to appeal the FAA’s decision to allow these large jets at SMO in Washington D.C [See City Defends Jet Ban in Federal Court on pg 1].

Rubin explained that the answer for regulation is not at the local level.

“This is an area of the federal government that might be able to move the ball the most at this time,” Rubin said. “They are very sensitive to the issue and willing to get involved, unlike the FAA.”

Along with presenting air quality information during the hour meeting, the attendees discussed possible impacts, solutions, and listened to local neighborhood associations about living with the presence of planes on a daily basis.

The meeting took place in an office in North Westdale, which abuts the east end of the airport, then traveled to a resident’s home to hear the full blast of the planes just a few hundred feet away. The legislators and community leaders eventually ended at the airport observation deck to experience the noise level and see the winged crafts depart.

The meeting focused on the east end of the airport where the reports studied noise and air pollution, but Laura Silagi, co-chair of the Venice Neighborhood Council’s Airport Committee, attended to shed light on the plight of other communities affected by the pollution. She said the meeting felt like the beginning of a relationship with an agency that actually lends a sympathetic ear to these issues.

“We hope we will get the various political people and agencies to look at total impact of the airport,” Silagi said. “We are all connected and impacted negatively by the airport. My desire is to have action taken.”

At the end of the day the FAA can choose whether to act on EPA policies, she said “there are many cracks in terms of getting anything done quickly.” Although the EPA can only make policy suggestions, she said the community’s role is to continue to inform and put pressure on the policymakers to get more pollution studies done for areas such as Venice, Mar Vista, and Santa Monica.