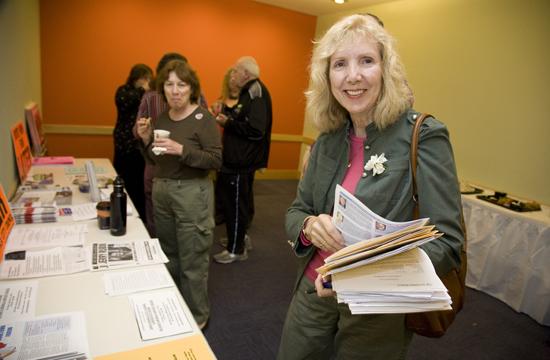 The ideal of democracy was expressed in real time on Monday night at the Martin Luther King Auditorium in the Santa Monica Main Library. Fifteen City Council candidates, vying for five open seats, answered questions the Santa Monica Mirror had solicited from the community at large and from neighborhood and local business associations.

Mark Gold, of Heal the Bay, asked if Santa Monica could have a self-reliant water supply which he believes would save money and be protective of ecosystems. Candidate Ted Winterer and incumbents Kevin McKeown and Terry O’Day, in their responses, said, “yes”, showed their knowledge of the Santa Monica water system and their commitment to sustainability and the environment with their proposals for water self-reliance, storm water infiltration, and water conservation.

Santa Monica resident Dana Cleasby asked the candidates if they would support expanding the network of parks in the city. There was a united chorus of support. Santa Monicans love their parks and are rightfully proud of them and council candidates are Santa Monicans. Incumbent Pam O’Connor showed her support and understanding of the park system by including the concept of a network of green streets and the vision of the “City As Park.” Ted Winterer talked about community benefits and fees from development as reasonable sources of funds.

Budget questions highlighted differences between candidates. Incumbent Gleam Davis strongly supports Measures “Y” and “YY” saying that Santa Monica residents have high expectations for City services and for City support for education and that the only way we have to ensure that those expectations can be met is for the measures to pass.

Opposition to Measure “Y” came from Candidate Susan Hartley. She expressed her commitment to using City funds to support education but had objections to the language and structure of the measures and stated she would look for other ways to provide funding for education. O’Connor said that was why it was so important to have transparency in the budget and the budget process, people have to be able to see what had been cut already, what would be at risk if the measures didn’t pass. Candidates Jean McNeil Wyner, Daniel Cody, and Jon Louis Mann also oppose the measures and thought any necessary cuts could be made by actions such as cuts in City staff salaries and other City expenses. Candidate Bob Holbrook stated that there would have to be choices made between services and fees and he thought it was important these measures be on the ballot – so the voters could express their will.

As questions were asked and answered, candidates demonstrated knowledge and caring. It was wonderful to see the generosity each showed by their willingness to run and to serve. It also became clear Gleam Davis, Bob Holbrook, Kevin McKeown, Pam O’Connor, Terry O’Day, and Ted Winterer had the stronger command and the greater breadth of knowledge of the issues before the City.

But having many candidates and many points of view made the discussion sharper and the issues clearer. Susan Hartley combined a lawyer’s attention to detail with her understanding of the budget and a compelling, common sense approach. We could all benefit from Jon Louis Mann’s suggestion for citywide WiFi. Jean McNeil Wyner’s idea of having seniors ride free on the Big Blue Bus is an idea that should be carefully considered. Daniel Cody, David Ganezer, and Robert Kronovet are all concerned about excessive intrusion of City bureaucracy into business. My local business friends tell me that is a concern City decision makers need to hear. Terence Later talked about the importance of community work. Linda Armstrong’s focus on helping the homeless population out of homelessness is a long-standing and on-going issue in Santa Monica. Jerry Rubin’s advocacy for trees and the urban forest have already made an important contribution to the City, among his long list of contributions to this community.

The questions the Mirror received reflected a shared understanding of what Santa Monicans care about. Education, the importance of taking care of our children, consideration and opportunities for our large senior population, transparency in budget and government decision making, staying on track with our new parks, protecting our neighborhoods, creating real alternatives to traffic congestion, relations between City Hall and city residents, sustainability, environmental stewardship, local businesses, the future of the Santa Monica Airport, and the role of development. In their answers, the candidates drew on a commonality of Santa Monica, its character, history, and ethos.

We at the Mirror, want to do our part to support the democratic discussion. Video of the Hometown Forum will be available on the Mirror website (www.smmiror.com ) on the candidate’s profiles and other election stories. Who will you vote for and why? We welcome your comments on the candidates and the election. Send your comments to election@smmirror.com.

I say, “Vote.” It’s your city, your right, and your responsibility. What Say You?