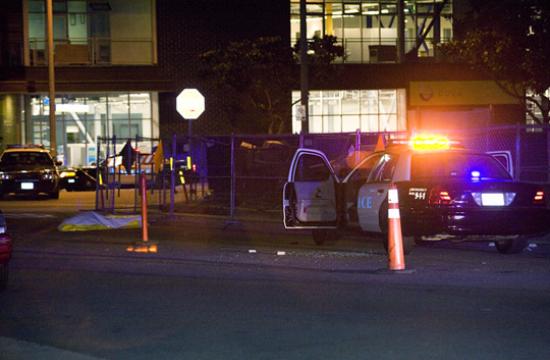 Police officers killed a man who fired on them after he allegedly shot his wife, critically wounding her, in a parking lot near a busy intersection in Downtown Santa Monica Friday night. That man was identified today as 33-year-old James Ramirez of Los Angeles.

At approximately 6:10 p.m. a female Verizon employee was shot by her husband after work in the parking lot in the rear of 1345 on Seventh Street, across from the Santa Monica Main Library branch located on Santa Monica Boulevard.

“Upon arrival, officers found a conscious female victim that had been shot in the head and upper torso,” said Sgt. Jay Trisler of the Santa Monica Police Department in a release. “The victim stated her husband had shot her. The victim was transported to a local hospital for treatment of severe injuries and remains in critical condition.” At the time of this report, her condition had not reportedly changed.

“It appears to have been a domestic situation,” said Capt. Wendell Shirley, also of the SMPD.

Based on the crime scene where multiple shell casings can be seen and witness reports, as few as six and as many as 12 shots were fired at the woman. The preliminary investigation revealed that the victim was shot while seated in her parked vehicle, and subsequently attempted to escape on foot. The suspect continued to attack the victim, shooting her several more times, ultimately incapacitating her. Witnesses reported that the suspect then pointed the gun at himself but either the gun faltered or Ramirez decided against it. SMPD also received similar reports.

Capt. Shirley said that officers in a police cruiser confronted Ramirez and order him at gunpoint to drop to the ground, but he did not comply. Instead he produced the handgun from his waistband and fired at the officers. “In fear for their safety, they returned fire,” Capt. Shirley said. “The suspect was hit and went down and was pronounced dead at the scene.” Bullet casings and shattered window glass littered the streets on either side of SMPD cruiser that evening. In front of the cruiser lay what looked like a body under a tarp.

Floyd English, a witness at the first scene, said he saw the first shots fired at the woman in the parking lot. He said both the shooter and the victim were both Latino. English said the husband was at least six feet tall, of a heavy build, with dark hair and a beard, a black blazer, and dress slacks.

No officers or bystanders were injured. The criminal investigation is being handled by the Santa Monica Police Department’s Robbery/Homicide Unit. The Los Angeles District Attorney’s Justice System Integrity Division is assisting in the investigation.

This incident is the second shooting in Santa Monica this week; unusual for this normally peaceful beach town abutting Los Angeles. Earlier this week, three high school students were fired upon after a throwing small pumpkins at a vehicle – one was shot in the upper leg/hip area, but was released from the hospital that evening. The shooter in that crime has not yet been identified and the incident is suspected to be gang-related. A few days later, a local high school girl was stabbed in the cheek during one of two robberies perpetrated by suspects that were later apprehended. The suspects were also gang affiliated.

Callers can also contact Crime Stoppers by either calling 800.222.TIPS, texting from your mobile, or by visiting their website at lacrimestoppers.org.