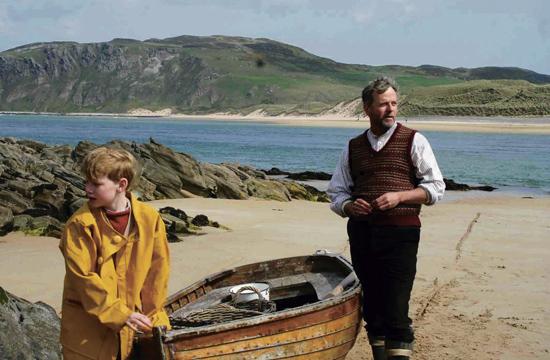 The third annual Los Angeles Irish Film Festival, compiled by Lisa McLaughlin-Strassman and Juli C. Laselle, took place last weekend and served up a delicious stew of unforgettable films which celebrate Ireland’s art of moviemaking and the heart of storytelling for which the Irish are famous.

The following is but a sample of the features and shorts presented during the four-day festival which kicked off Friday night at the Motion Picture Academy’s Linwood Dunn Theatre with “William Rogers in Dublin,” a silent film made in 1927, and “Ireland A Nation: 1914,” a story of the country’s struggle for home rule.

American Cinematheque’s Aero Theatre in Santa Monica hosted the next three days, beginning on Friday night with “The Line,” a very amusing tale of writer’s bloc. Written and directed by Maria O’Connor and starring Jaimie Carswell and Anthony Murphy, this short silent film used animation and live action, with a wonderful musical score by Joe Conlan. The entertaining moral is; one man’s lousy writing is another man’s bestseller.

In the Irish tradition of illuminating the struggles of family life, the feature, “Will Collins’ My Brothers” is a poignant tale about three brothers whose dad is dying, and their journey to the seaside town of Ballybunion in a broken down bread van to find a replacement watch for his busted one. Under the brilliant direction of Paul Fraser, we gain deep insight into the dynamics between the three siblings in their struggle with interdependence, as well as the dangers that could lurk on a country road. The three young actors, Paul Courtney, (Noel) Timmy Creed, (Paudie) and the most amazing T.J. Griffin, who plays Scwally the youngest of the three, portray the brothers with incredible skill. Griffin’s gorgeous face is Ireland. The film is Fraser’s directorial debut and one hopes there will be many more films from this gifted director.

The Saturday matinee featured the most-splendid, beautifully-shot “A Shine of Rainbows,” featuring a powerful script written by Vic Sarin, Catherine Spear, and Dennis Foor and tenderly directed by Vic Sarin. This stunning film, shot in County Donegal, is the story about Tomas, an eight-year-old orphan, brilliantly portrayed by John Bell, who is adopted by the beautiful and talented Connie Nielson (Maire O’Donnell) and taken to Corrie Island to live with her and her seemingly unresponsive husband, “Himself,” played by the amazing Aidan Quinn. Maire’s patience and unending magical love for this troubled child transforms him from painful shyness to a rather sociable young chap who makes friends and overcomes some of his demons. But alas, tragedy strikes and it’s time to break out the tissues to stem the flow of assured tears as a new bond unfolds between the grieving “Himself” and the young lad.

Saturday evening offered up “Moore Street Masala,” an amusing musical short about the pursuit of love by a store clerk named Baba, played by Deva Naidu and the woman of his dreams, portrayed by Anna Wilson. Written and directed by David O’Sullivan, it was the winner of the Audience Award at the 2009 Cork International Film Festival.

“Cup Cake,” an edgy comedy written by Christine Murphy and directed by Colin McIvor, is about a young man who inherits his family’s cupcake shop after the mysterious death of his parents and has turned it into an abysmal failure. Faced with a dangerous debt, he makes a deal to marry a desperate “she devil” in order to be absolved of his debit. Surrounded by a colorful group of dysfunctional friends, mayhem breaks out as they pitch in to help him bake a cake that will win a contest offering a big prize and getting him off the marriage hook. Under McIvor’s lively direction, the action moves along at breakneck speed with multiple laughs along the way.

The festival continued through Sunday. With the outstanding material featured at this year’s festival, we all look forward to the fourth annual Irish Film Festival.

For more information and for a list of the other feature films and shorts, go to www.lairishfilm.com.