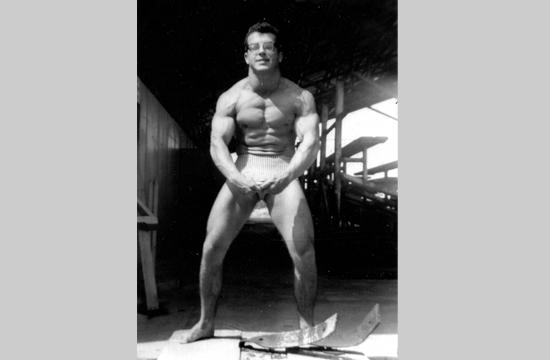 Grant Lashley was born in Union City, New Jersey in 1935 amidst the Great Depression. He started working when he was 12 during the summer with his father, a machinist and building contractor. He loved working with his Dad, his best friend and mentor, who taught him how to think, to get things done.

Lashley was short, wore glasses, was what one might refer to as chubby, and he got picked on by the bullies in grade school. He says that one day something within him “exploded.” In that instant he made a decision to change, to be like Charles Atlas – the man in the magazine ads who came back to “kick sand” in the face of the bully, to be the protector of the less fortunate and overpower the bully. Like a bolt of lightning, he struck. It was at the school playground. The villain, Donald Webb, was riding his back, hitting him on the head, making him feel like a real nerd in front of the others. And strike back he did! If you want change you must take action, a mentallity he credits to his Dad.

He threw a punch hitting Webb in the side of the head knocking his thumb out of the socket since he had never learned to fight. Things were going to change. He sent for a Charles Atlas course and made a barbell from a broom handle, paint cans, and concrete. All this was not enough. He joined the New Brunswick, N.J. YMCA and a local gymnastics club. Goodbye nerd: hello champ.

By age 16, Lashley looked like a little Mr. America as a body builder and was winning first place in every gymnastics event he entered. When an opportunity appeared to join a circus hand balancing-act, Lashley took it, hoping for a more glamorous lifestyle. As fate would have it the balancing career of “Clodald and Grant” was cut short by the Korean War. Rather than be drafted, Grant enlisted in the U.S. Air Force.

After initially “washing out” of radio operator school in Biloxi, Mississippi, Lashley was posted to Altus Air Force Base, Oklahoma where he was assigned to Special Services because of his background. He was able to utilize his skills with hypnosis to help dental patients to overcome their fear of needles and to improve their learning skills.

When the new gym at Altus was completed, was handed the keys because of his background as a gymnast, circus acrobat, and body builder. But before he took on that responsibility, he was sent to school at March Air Force Base in California for further training. He became a physical conditioning specialist tasked with rebuilding the bodies of men wounded in the Korean War. “I helped rebuild lives, I didn’t kill,” he is fond of saying.

In 1954 General Curtis LeMay of Strategic Air Command, a second degree black belt in judo, initiated a program for Air Force flight crew members who were out of shape, to learn and practice the martial arts. Grant was sent to Tokyo for training at the renowned Kodokan Judo Institute where he learned Judo, Karate, Taiho Jitsu, and Aikido. The Kodokan was so respected that passerbys would bow when they recognized the distinctive pin worn by students of the Institute, said Lashley.

Returning to Altus as a dedicated body builder, Lashley entered and won the Mr. Oklahoma contest in 1956. After an honorable discharge from the Air Force, Lashley managed Vic Tanny Gyms in New York and New Jersey. He then landed a gig at a gym for women in West Palm Beach, Florida until he began singing, dancing, and acting lessons at Imperial Studios in Palm Beach, where he would meet the woman he married – his ballet teacher!

In 1960, Musical Theater came to Broadway in New York and Lashley landed a part in “Carnival,” only two years after his first dance lesson. Then came “What Makes Sammy Run” as an understudy to Steve Lawrence. Next was the musical “Ilea Darling,” as lead dancer, starring the famous Greek actress Melina Mercury. “We had a torrid love affair off stage,” claimed Lashley, with a sheepish grin. Lashley looks back fondly on his show business career as his golden years. Appearing with Richard Kiley in “Man of La Mancha,” was “awesome” he said. Then came the national touring company of “La Mancha” with Jose Ferrer. All of this was interspersed with summer stock, commercials, voice overs, and a singing night club act “Grant Lashley with Love.”

After two bad Broadway experiences, “Indians” and “Jacques Brel Is Alive and Well and Living in Paris,” Lashley started his own set design and construction business utilizing a technique learned from his father: he first became a set designer then learned how to do it. He has applied this “secret” to many disciplines throughout his life.

“Everything Grant did he did well, from deigning and building sets to remodeling our office building in Hollywood where he had his own set-building space and office,” said Ross McCanse, owner and director of a commercial production company in Hollywood said.

During this time Grant started dabbling with sculpture, again applying the “technique” he learned from his father. Become what you want, then learn how to do it. He became a sculptor, then he learned how to sculpt. He works in clay or wax and casts in plastic and bronze. He again used the “technique” to start a promotional merchandise business called “Affair to Remember” utilizing the skills he had acquired along his life’s journey.

Lashley met actress Millie Barron at an improv acting class. Soon after Millie ended up in the hospital with leukemia Lashley said he sang and danced all around her hospital room to help cheer her up. One day Millie asked “Why don’t we get married so you can have my inheritance?” They got married in the hospital. However, it was a brief marriage as Millie died eight days after leaving, Grant a considerable bequest. At her memorial service actor Ed Asner remarked, “Millie was the most famous nobody in Hollywood.” Millie was Grant’s third wife.

Looking ahead to writing the fourth chapter of his life Grant Lashley said he would like to share his experiences with the younger generation. He says “the older generation is a huge disappointment, they aren’t at all what I thought they would be like.”

Recently Lashley taught himself how to play the xylophone. Now he’s using the “technique” to learn piano.