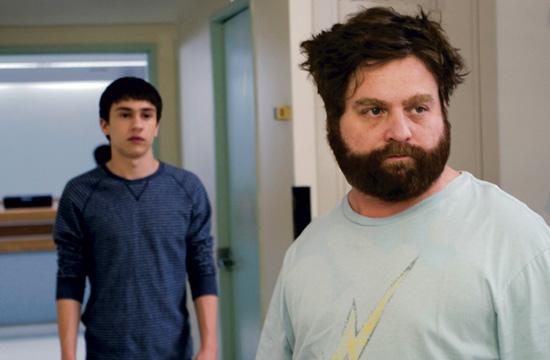 Actor Zach Galifianakis steals the show from his first on-screen moment in “It’s Kind of a Funny Story”. The new dramedy by writer-director duo Ryan Fleck and Anna Boden (“Half Nelson,” “Sugar”) is imperfect in its sometimes cliched and tidy rendering of a 16-year-old boy committed to an adult psych ward, but the lead performances are worth the price of admission.

Craig (Keir Gilchrist) can’t handle the pressures of teenage life. He goes to a fancy high school in Brooklyn, is on the verge of applying for an even fancier summer school program, and can’t stand to watch his only love, Nia (Zoe Kravitz) fall in love with his smarter, cooler, all-around superior best friend. Plus, he has a nasty problem with involuntary projectile vomiting, a problem that is exacerbated by his over-achieving father (Jim Gaffigan) and fragile mother (Lauren Graham). Trying to deal, Craig checks himself into a psych ward, only to quickly change his mind about the extent of his mental health issues. But it’s too late—he has to stay for a minimum of five days on the adult floor due to renovations on the teen unit. Enter Bobby (Galifianakis), a guy who can’t cope with life in the real world, but whose sense of humor is a saving grace for Craig.

This is no “One Flew Over the Cuckoo’s Nest,” that’s for sure. The story skips along at a pace that is far too upbeat for a kid suffering thoughts of suicide. Craig quickly falls in love, discovers his true calling (visual art), and even heals a fellow patient, a seriously depressed man who can’t get out of bed until Craig plays him some catchy music. There’s a whole lot of condescension toward the mentally ill here and way too many super-simple magic solutions to illnesses that are unbearable at best, life-threatening at worst. Still, there are a small smattering of uplifting and semi-inspiring moments, all of which happen when Galifianakis is on screen. But the bottom line is that the extraordinary actor seems too good for the often trite material.

Viola Davis is charming and endlessly watchable as Craig’s shrink, but her character is, like many of the characters here, a skimpily drawn skeleton of a real human.

If you’re after a few laughs and a few good observations about the insane pressures put on the teens of today, this is the movie for you. Don’t expect earth-shattering insights into the nature of mental illness, or even humor that leads to understanding. Most of the jokes are goofy, mean-spirited jabs at clownish characters we don’t care about. The comedy does not derive from tragic truth, but from contrived antics that have all the hollowness of lazily crafted set-up/punchline gaffs.