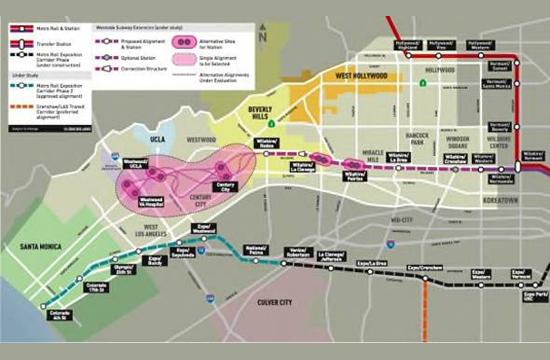 The Los Angeles County Metropolitan Transportation Authority (MTA) has announced approval of a route for the planned Westside subway. The route selected out of five options will take the subway from the Wilshire-Western station (terminus of the current Purple Line) to the Veteran’s Hospital in Westwood.

The choice of the Wilshire-Western to VA route ( known as the LPA or Locally Preferred Alternative) came after numerous community meetings and rider input on a Draft Environmental Impact Study/Draft Environmental Impact Report that was available for comment until October 18. As reported in the Mirror (“MTA Releases Draft EIS/EIR for Westside Subway” October 1), most of those who attended the public forum in Santa Monica on September 29 preferred the Wilshire-Western VA route to the other alternatives.

The 9 /12 mile route from Wilshire-Western to the VA can be built with existing funding, as opposed to the Santa Monica terminus and West Hollywood spur options, which would necessitate additional funding. The estimated cost of the LPA to the VA is $5.15 billion.

The MTA Board also approved a regional connector through downtown Los Angeles that would connect the Gold Line to the Blue Line and future Expo Line, enabling riders to make connections without having to transfer to the subway or bus.

The regional connector, with a cost estimated at $1.37 billion, was passed unanimously by the MTA Board. The LPA to the VA passed 9-0 with one abstention by Mike Antonovich.

Construction of the subway extension will begin in 2013 after a Final Environmental Impact Review. The subway is to be built in three phases: to Fairfax Avenue by 2019; Century City by 2026; and to Westwood in 2036. (If money is obtained by the 30/10 plan or other funding, the subway may reach completion sooner).

A decision has yet to be made on the location for a station in Century City and two stations in Westwood.