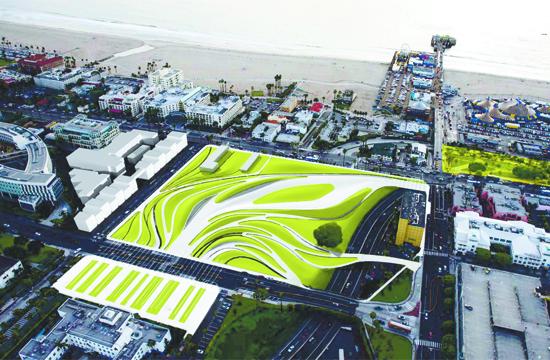 The Palisades Garden Walk and Town Square garnered input from Santa Monica City Council, which focused on balancing the connectivity and intimacy of the large hub of the city, during Tuesday’s meeting.

Design consultant James Corner of James Corner Field Operations, a New York-focused design company, presented the park designs based on the community’s vision, with civic engagement and sustainability top on the list. Corner explained as the “heart of the city,” the highest use for the area will be lounging, picnicking, sitting, and vista views.

The Council stressed the need for connectivity in the city because the park site has the potential to link the disconnection downtown with the ocean. Councilors underscored this hope with concerns that the park be much more than a mere hub for cyclists and people passing through. Council members Gleam Davis and Richard Bloom both pointed out the challenge for the firm was to create destination, not a transportation corridor.

Council member Kevin McKeown spoke on behalf of cyclists who want the ability to cross through the park area instead of being banished to the perimeter of the park. Two camps are campaigning on where people on rollerblades and cyclists should have access, Corner said, so the firm is creating options for a dedicated bike path in the park as well as a perimeter path.

“Recognize that mobility is important – that it might even be fun to roller blade or cycle through the park – but do it in a way that is safe is important,” Corner said.

The three concept park designs presented on Sunday all share similarities Corner said, with each being an “interpretation of Santa Monica nature.”

The Arroyo Wash design focuses on largest open spaces with meandering paths – similar to river streams – that feature cable trellises above the tree canopies offering lighting and an architectural statement. The Arroyo Ravine features elevated landforms to utilize ocean views in a Mediterranean sculptural design. The third design, the Arroyo Dune, is a complex park. It has the most shade of the designs, thanks to the varied tree canopies and draught tolerant vegetation, as well as intimate social spaces reminiscent of San Francisco’s Golden Gate Park.

Many council members expressed interest in the Wash design, with mixed reviews on the overhead lighting aspect. The mayor expressed complete disdain for the structural lighting, while Council members Terry O’Day and Pam O’Connor found the cable lighting innovative. One unforeseen side effect of the cable trellis lighting is the creation of aerial seating for birds that can reek havoc on the people below, a practical warning administered by Bloom.

The designers also studied elevation with a cherry picker to find the height (between five and 65 feet) that offers views of the Santa Monica Pier, the ocean, and city hall. Corner explained that the best views of the landmarks in the area are about 15-20 feet.

Corner said the park will focus on informal spaces with an aversion to designated formal and lighted spaces for outdoor performances. A sentiment felt strongly by Mayor Bobby Shriver who stressed the need for “wildness” at the park instead of the formal performance areas or designated yoga spaces that are found across the city.

Despite the usual spectrum of ideas from the Council, most voices agreed the site should preserve the integrity of the rose garden memorial for fallen war soldiers. The Landmarks Commission educated the designers on how to best incorporate the original intent of the memorial into the new design.

This meeting marked the halfway point for the detailed community approval process that has reached hundreds of residents over the last four months. The next community outreach meeting will be Nov 13 at Santa Monica High School and the following day the council will hear more revisions to the designs.

For more information or to send all types of input for the designs visit smciviccenterpark.com.