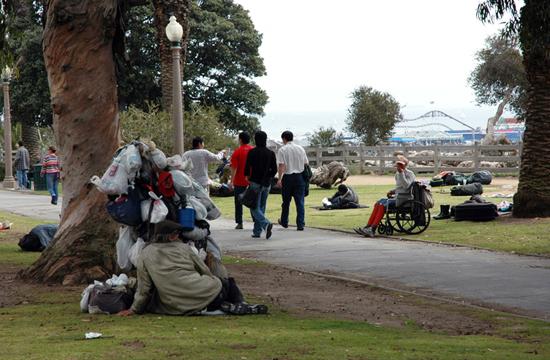 Facing a dire situation to combat homelessness not only at the local and state level, but also national as well, the City of Santa Monica staff have worked for years to find viable solutions to a seemingly endless problem. The U.S. Department of Housing and Urban Development (HUD) funds cities programs, including Santa Monica, as well as state programs, to get people back on their feet and back into homes.

It is estimated that there are between 2,300 and 3,000 people who are homeless on any given single day in Santa Monica, according to the Ocean Park Community Center, one of the many service providers to the homeless in the city. This number includes people in homeless shelters or transitional housing facilities and people sleeping outside.

Santa Monica has a different range of demographics compared to nationwide homeless statistics, according to the OPCC website, including a higher average-age, more women, more chronically homeless, and those with mental illness.

The Santa Monica Home for Good program aims to create a workable program locally, said Setareh Yavari, human services administrator for the Homeless Initiatives department in Santa Monica. The program focuses on new measures to prevent displacement. The goal is also to reduce the number of new households going homeless and to obtain housing for those without.

In 2009, Santa Monica accepted more than $500,000 from HUD, which has been commissioned to distribute funds through the St. Joseph Center homeless. Communities and programs that are currently housing people and keeping people housed, and also prevent lost housing, dictate funding decisions and policies.

The federal emergency fund money to provide for the homeless ensures these 55 residents can stay in their homes for about $160,000. More than 20 percent of 55 resident helped by the program live in the Pico Neighborhood of Santa Monica.

“It’s a staggering number to show people,” said Mayor Bobby Shriver. He reiterated that this investment to prevent homelessness is the “cheapest and best” way to save the government from uncompensated hospital or health bills that can cost in some cases up to $100,000 per person.

When pressed to discover from where the homeless in Santa Monica originate, the City established a data collection system that went into effect this year. This allows Santa Monica Human Services to “get more of a story where individuals come from,” Yavari said, and to reconnect them with their communities.

The Santa Monica homeless initiative helps people to also secure jobs and connect with jobs, said Yavari. The pivotal goal of income growth for the homeless, she said, will come about by building skills and getting people connected to jobs. For people that can’t hold jobs, she said the program aims to ensure those people receive the correct assistance and benefits they are entitled to.

“It is not enough to count the number of people served or tout the variety of services offered,” Yavari said.

After a self-proclamation to not be cynical, Bloom said after working on a different, pervious 10-year plan that as soon as it was released, immediately ended up on shelf and has “been sitting there ever sense” with no follow-up. He said the follow through would be critical to this plan’s success.

The HUD distributes about $82 million to cities across the country in the effort to end homelessness. The funding is distributed according to a formula designed in the 1970s that uses six factors such as in population size, poverty rates, and overcrowded housing.

Home for Good is working with Los Angeles partners in an attempt to reformulate HUD’s current nationwide funding methods to better attend to individual city needs. For the money to be distributed equally, each city would receive $2,600.

Funding amounts vary greatly due to the formula that gives about $10,000 a year per person in Pittsburgh, one of the highest levels, down to only $500 per person in Las Vegas. Los Angeles County receives less than $2,000 per person per year. The funding formula does not equate to the level of homelessness in a given city.

The United Way and the Los Angeles Chamber of Commerce partnered for two major efforts including the aim to improve federal policy and create a viable action plan to eliminate chronic and veteran homelessness in Los Angeles in just five years.

The United Way pulled data from more than 75 cities to determine potential improvements to the formula, Marge said, and are now campaigning to gain support for change across the county. HUD merely pointed to the time-honored methods despite the “overwhelming clear” data, she said.

Next year HUD must hear recommendations to change their system, without any policy obligation to change practices.

Shriver pointed out that the “fair amount of money” is not necessarily an equitable distribution of the money at $2,600 per person, but a mere number to see how to level the playing field between the dramatically different distributions.

“If this plan is simply building on the communities that are already the kind… of the good actor communities, I think the plan is going to be missing the mark,” Council member Richard Bloom said. “We need a programmatic plan in investing the entire county and business community in realistic solutions.”

Council member Gleam Davis elaborated on the reduction of homeless persons issues in areas such as the Third Street Promenade. Some cynics say the City shouldn’t offer more services, arguing those programs only attract more homeless, Davis said, yet if the City offers the right programs then it can reduce these issues. Proponents also point to recently annual measurements indicating consistent drops in the homeless population in Santa Monica – including this year’s measure of a 20 percent drop.

“We have made material gains here in Santa Monica,” Davis said. “It’s tempting to be cynical, but I think what we have shown, if we can get over our initial cynicism we can really make a difference.”