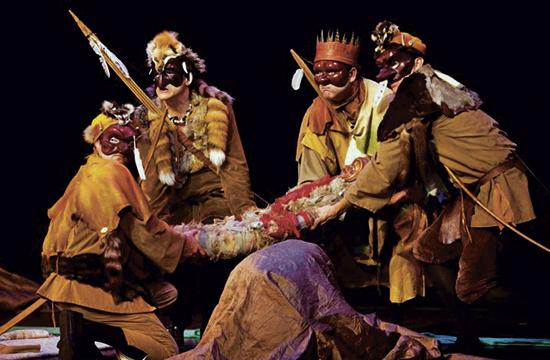 For a unique, exciting theatrical experience, Tim Robbins’ “Break The Whip,” on stage at The Ivy Substation, is just the ticket. The story, told in a highly stylized manner, depicts life in the Jamestown Colony in the years 1609-1623 and delves into the social dynamics of three separate cultures (the Powhatan Indians, the English settlers, and the West African slaves) as well exploring their impact on each other.

According to program notes from writer/director Robbins, the project was inspired by the works of several historians and began as an Actors’ Gang workshop project in the summer of 2009 culminating into this polished, cohesive script. Adding to the authenticity of the material, the actors playing the slaves speak in Kimbundu, while the actors playing the Indians speak Lenape. Subtitles flash on a screen.

As the play begins, the ensemble of 23 actors, highly trained in stagecraft, are seated on long benches off stage left and right and we hear Elizabethan music. An assortment of costumes and masks are hung from pegs in full view of the audience and this area is used throughout the evening for the actors to change their garments and/or masks who then sit and wait for their next cue.

What could have become diatribe is, in fact, an intense exploration of the life and times of these three separate groups in a most profound, emotional way. We see the plight of the white settlers who are reaching high levels of starvation but are afraid to reach out to the Indians for help, and the cruelty they inflict upon their servants and slaves. We see the Indians’ growing distrust of the white man and the agony of the slaves as well as the indentured servants, some of whom learn how to manipulate their masters by amusing them. Yet even in this new land the indentured servants are still treated as second-class citizens, even when burying their dead (as the upper class get first dibs on burial sites).

Although the indentured servants are banned from fraternizing with the slaves, a romance blooms resulting in a startling whipping of the young woman. This scene was particularly riveting as you can almost feel her pain as her body moves in rhythm to the lashing, despite a lot of the action and all the props being done in pantomime – again a tribute to this ensemble’s wonderful training, ability and Robbins’ fascinating staging.

When doing a huge undertaking like this it is quite easy to break into stereotypes, but in this case, all the characters have been fully developed with their own emotional and physical characteristics, with their entire bodies engaged in expressing the text. Robbins’ has done an outstanding directorial feat in tying together all of the complicated elements, including using Jamestown Music by David Robbins and the New Anarchestra, Angolan tribal dance, complex shadow puppetry, and elements of the Commedia dell’ Arte style of theatre in developing some of the characters. He has succeeded in creating a truly rare evening of theatre.

The Actors’ Gang at the Ivy Substation