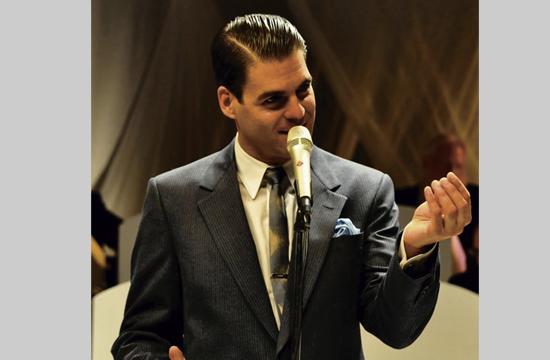 For lovers of Frank Sinatra and big band music, as well as a nostalgic glimpse into the earlier challenges of shooting a television show, Hoboken to Hollywood, billed as “A Journey Through the Great American Songbook,” is a musical and visual treat.

A world-premiere guest production on stage at the Edgemar Center for the Arts, produced by Peach Reasoner, this glorious evening of music, with a sprinkling of comedic theatrics, is skillfully directed by Jeremy Aldridge who won the Los Angeles Drama Critics Circle Award for his direction of the delightful “Louis and Keely, Live at the Sahara.”

The book, co-written by Luca Ellis, Paul Litteral (musical director) and Aldridge, is the story of the behind-the-scenes challenges of taping a mid-sixties television special starring Frank Sinatra, played with exquisite perfection by the matinee-idol, gorgeous Ellis who has captured the tone, phrasing, and physical characteristics of the greatest pop voice of the last century.

As the audience files in, Paul McDonald is at the piano playing such selections as “Night and Day” setting the tone for the musical treats that await you. The cast and members of the Nelson Riddle Orchestra (the fabulous Paul Litteral Orchestra,) Jeff Markgraff as Nelson Riddle, mill about the stage, talking and kibitzing with each other as the technical components, which have fallen squarely on second assistant director Andy’s shoulders, played marvelously by Pat Towne, are attended to. He gives a hilarious performance as the frantic, beleaguered techie who suddenly has to take charge and feels ill equipped to do. Throughout the “taping,” Andy is in a constant state of near hysteria, slinking or crawling on the floor adjusting cords, slating the takes, holding a microphone, lying down on his side holding cue cards, or taking instructions from the trying-to-be patient director Dwight (Al Bernstein). Andy grows more frantic as he tries to juggle as many technical balls as he can, some with very funny failures. But don’t despair, as Andy gets his magical moment that surprises the audience and leaves them cheering.

Adding to the authenticity of the evening, there are several very amusing tapings of a commercial for a “Schmimex” watch which “Takes a Licking and Keeps on….Telling Time. (ha ha for those of you who remember the original John Cameron Swayze Timex commercials – It Takes a Licking But Keeps on Ticking.) Chandler Hill as the announcer has the perfect deep voice and Franci Montgomery as his assistant Darlene is the appropriate “air head” demonstrator. Also included are amusing commercials for the Ford Mustang introduced in 1964 at a sticker price of $2,500.

Art Director James W. Thompson has created a wonderful, authentic set, complete with a bandstand, television cameras (sometimes a bit intrusive), and all the technical elements that would go into taping a show. Kathi O’Donohue does a nice job with the lighting design as does costume designer Jessica Olson and sound designer Ron Hitchcock.

All this said, the glue that keeps the entire production going is the velvet voice of Ellis. His 1,000 megawatts smile lights up the stage as he gives the Sinatra rendition of such standards as “Route 66,” “Bye, Bye, Blackbird,” “Swinging on a Star,” “Almost Like Being in Love,” “I’ve Got My Love to Keep Me Warm,” “Call Me Irresponsible,” “Don’t Worry ‘Bout Me,” “Old Black Magic,” “Blue Moon,” “Fly Me to the Moon,” “Young at Heart,” and the magical “One For My Baby,” which Ellis sings at a bar with a cigarette and a drink. (Maybe use a fake cigarette?) Oh yes, there’s that famous street lamp with Ellis wearing a trench coat and fedora as he walks off stage leaving a very happy audience who just experienced a thrilling walk back in musical time to revisit some of our most favorite songs.