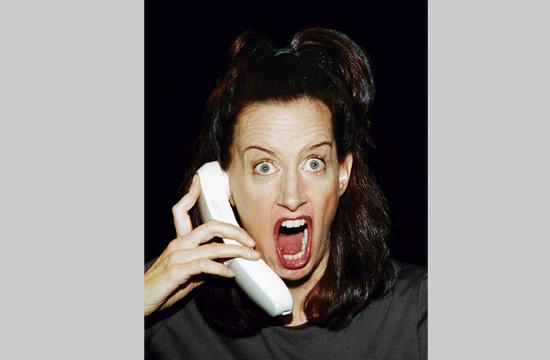 “Art isn’t pretty,” says the heroine of Ann Randolph’s “Loveland,” a solo show based on personal tragedy. In this case, art is also funky, impolite, too loud, and sometimes tasteless. And yet it’s all right because aging and death are subjects that, as Randolph sees it, don’t lend themselves to greeting-card sensibilities.

“Loveland” takes place on a cross-country airline flight as we follow the thoughts of Frannie Potts, a character whose traits are anything but those of a theatre hero. She is almost obnoxiously nerdy. She grimaces and sticks her tongue out a lot. She delivers many of her lines (they’re actually her thoughts) in a high-pitched wail. She’s also very full of thoughts and feelings about sex. While you might not want to sit next to her on a plane, there’s a reason for her erratic behavior. She tells us that she “lost” her mother a few months before. But then again, as she notes, “lost” is one of those useless euphemisms for death.

Frannie’s ruminations take us into flashbacks about her life and her mother. Randolph appropriately does the voice of Agnes Potts with a similar but distinct shrillness that suggests how the daughter got the way she is. Flashback vignettes recall mother and daughter’s trip on the Palm Springs tram, singing together, the rueful day that Frannie had to put Mother in a nursing home. In between, Frannie gazes out the window at aerial views of the U.S., and enjoys fantasies about the pilot, whose voice we hear on the PA system.

The seriousness of the theme of bereavement is never far from the audience’s consciousness. In that light, Frannie’s often silly behavior and lapses into foul language and sensuality might seem really low. But audiences find themselves laughing at this show, no matter how much a tiny voice inside might be telling them it’s not appropriate. Randolph is aware of how thin the line is between comedy and tragedy.

Randolph is especially gifted at “facial gestures to sound,” a gift she also ascribes to Frannie. Her long thin face turns to rubber as she goes through all sorts of grimaces and expressions. She may be one of the rare souls who can perform a comedy pratfall with just her face.

In real life, Randolph is not only a performer and writer, but does performance-as-healing workshops. “Loveland” was her own self-healing project, conceived as a result of numerous cross-country air flights to see her parents during the last year of her father’s life. In conjunction with “Loveland,” which she is currently performing every weekend in Berkeley as well as on Thursday evenings in Santa Monica, Randolph will be doing a series of workshops on life and loss, to be held in Santa Monica, San Francisco, Esalen, and Hawaii.

For some older adults whose parents are nearing the end of their lives, “Loveland,” might strike a sensitive nerve. The play builds to a pratfall payoff that is very dark comedy indeed. But for the open-minded, the play is an entertaining chance to release the tension from taboos. And kudos also to Randolph for portraying her heroine’s sexuality without moralizing or punishment.