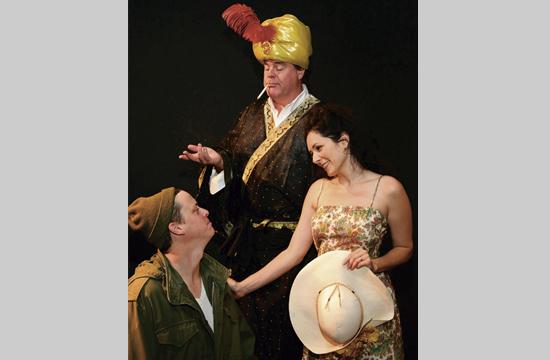 It’s a given that due to space and budgetary limitations, Equity Waiver productions must rely on a strong, script, a professional acting ensemble, and skillful direction. Some productions miss the mark either with weak scripts, weak actors, weak direction, or all of the above. That said, Steve Stajich’s “The Imp,” presented by Bigfoot and the Fanatic Salon in Culver City, not only hits the mark, but goes well beyond any inherent limitations.

The evening is comprised of five short comedies, illuminating in a most hilarious way, the foibles of human behavior when confronted by a magic genie – who offers several wishes. The genie, played with just the right amount of satire by John Carney, has been bottled up for centuries and is released in the first playlet “Prelude: One Day in an Antique Store, ” in which a couple, wonderfully played by Paul Schackman and Dahlia Waingort, are in an antique store. The wife is browsing and inadvertently discovers the Genie who she releases.

With Stajich’s crisp, funny, sometimes sardonic dialogue at work, the laughter begins and is sustained throughout the evening. Except for one sketch entitled “Corn,” in which he plays the mad scientist, Dr. Fritz Mendalo, who has developed mega giant corn, Carney is the Genie and under Stajich’s skillful direction, developed an off-the-wall character with an unexpected edge. He smokes, swears, speaks like a New York Irishman, and grants wishes with a certain amount of flair and annoyance.

It isn’t always easy to assemble a top-notch professional cast, but Stajich managed to put together a very talented ensemble which includes Frank Noon and Matt Morgan, who play father and son in “Blammo,” the story about a father in the specialty business who develops silly products like fake vomit and dog poop while the war is raging. The son is overwrought at his father’s lack of concern – enter the Genie who grants a wish that results in a turning of the proverbial tables. Noon also plays Popkins in “Corn,” along with Kym Hoy, and Sarge in “Hellfighters in Hell,” with Matt Morgan as Taggart, a non-preachy anti-war statement, while Schackman plays “The Man” in “Good Dog” with Dahlia Waingort as Dr. Nancy who’s treating Hoy’s dying dog, Mr. Schultz.

The acting is solid throughout the five sketches with the multiple characters fully actualized. With regard to the set changes, Stajich again shows great creativity as the blackouts are covered with his playful original music that keeps the laughter going while the actors replace set pieces.

In each of the sketches, perhaps with the exception of “Hellfighters in Hell on Hell Day,” the subtitle for the evening is “be careful what you wish for” as you might get your wish, but the ancillary results might not be what you expected. In any case, you’ll laugh your way through the evening and leave the theatre with an ear-to-ear smile.