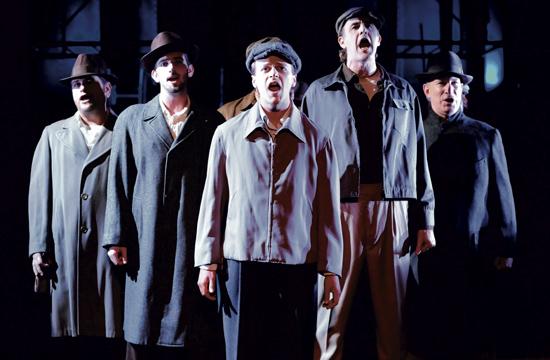 Clifford Odets didn’t write the escapism prevalent in the economically bleak 1930s. He wrote about the effects of that bleakness on the usually hopeful American psyche. California Repertory Company has taken Odets’ early play “Waiting for Lefty” and adapted it in a production that resonates with pertinence to the difficulties of the present era.

“Waiting for Lefty” was inspired by an actual New York City taxi drivers’ strike in 1934. This adaptation begins and ends with meetings of a taxi drivers’ union, with most of the workers wanting to strike, while the union head, Harry Fatt, rants against the idea of striking. In between these turbulent bookends are scenes from the lives of various working class people: taxi drivers and their wives and sweethearts, doctors at a clinic, workers at a chemical lab, families struggling to pay the rent; even a dance marathon has been added.

The play is not one story but a series of set pieces that establish Odets’ theme: life under an economic downturn is hell and capitalism is to blame for the whole situation.

The “Lefty” of the title is not so much a character (a taxi driver elected to leadership in the union, he never appears on stage) as a state of being that the characters are hoping will come. But Odets, despite his leftist agenda, does not freight his dialogue with endless slogans or turn his characters into one-dimensional symbols. Fatt accuses his drivers of being “Reds,” and one driver, Joe, in an argument with his wife Edna, wonders out loud if she is also a “Red.” “I don’t know what that means!” she cries.

Not all of the characters are aware of leftist ideology; they are aware that their children lack shoes but most of them lack a vision of how to free themselves from an endless cycle of poverty.

One aspect of this production that audiences may find tough to deal with is that the characters do a lot of shouting. This is typical of Odets; his characters are emotional and not used to hiding their feelings. But here the screaming often becomes too loud and the screamed dialogue is not always audible.

Director Kim Rubenstein and the company have also chosen to interpolate scenes and characters from other Clifford Odets plays, namely “Awake and Sing,” “Golden Boy,” and “Paradise Lost.” All of these plays also deal with working class people struggling to survive, but some scenes work better than others. The “Paradise Lost” sequence, in which a family awaits creditors who come to take their possessions, seems too tempestuous out of its original context. On the other hand, a scene from “Awake and Sing” in which a World War I vet pleads with his girl to leave her husband and return to him, is performed with subtle grace.

Eleven actors play a variety of roles as well as moving the scenery and props, even singing and playing instruments during the period musical numbers that are a welcome break from the play’s tension. Among the standout acting moments are Craig Anton and Sarah Underwood as the battling couple Joe and Edna, and Josh Nathan and Anna V. Steers as the couple from “Awake and Sing.”

“Waiting for Lefty” is not an evening of mindless fun. But this production is worth seeing for its timely take on the material.