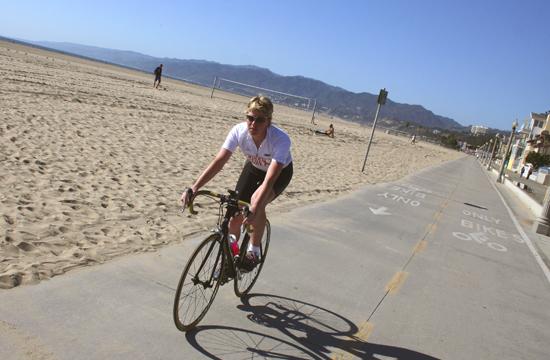 Iris Klein ended her 2,500-mile Route 66 solo bike ride from Chicago to Santa Monica on October 26. Her trip’s goal was to raise awareness and funding for breast cancer research through her organization, BIKE4THECURE .

Klein also visited health clubs and gyms along the way that were hosting “Breast Cancer Awareness Workout Nights” to help encourage people to engage in a healthy lifestyle. Her visits also included opportunities for people to physically challenge her.

Klein, who is German, set up BIKE4THECURE because she lost a close personal friend to breast cancer in 2009. Soon after her loss she became aware October was breast cancer awareness month while on a visit to the United States.

Klein told the Mirror she chose to ride up to 100 miles per day for 44 days on Route 66 because it Route 66 “stands for dreams and missions and doing this project was my mission.” Her street address in her hometown, Bergisch Gladbach, Germany is also 66 and her friend who died from breast cancer lived near Route 66 in Illinois. She also liked the fact that Route 66 has “a lot of history and is well known by people.” Klein’s goal was to raise $10,000, but at the time of the Mirror’s interview she was unsure about how much money had been raised. The money is being donated to the Susan G. Komen For The Cure organization.

To Klein, the ride was one of her “biggest adventures” and gave her more opportunity to “get to know the states.”

In addition to working out, Klein is also a big animal and nature lover. She also loves the United States. She attended high school in Seattle for three months in 1991 and studied Project Management at University of California, Berkeley Extension in 2000. Professionally, she works as a Marketing Manager.

Klein ended her interview with the Mirror by stating “if I have the money I would do this again in a heartbeat.”

For more information on Klein and BIKE4THECURE can be found at www.bike4thecure.com.