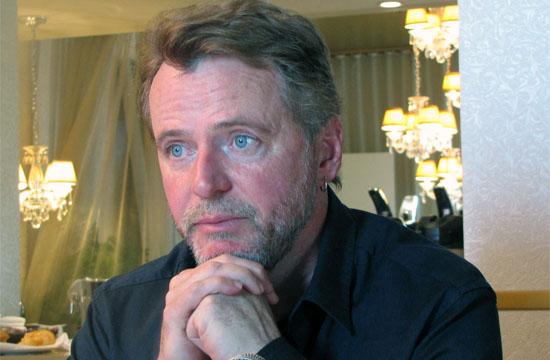 Aidan Quinn’s piercing blue eyes have been lighting up the big screen for decades. One of his many memorable roles being that of Alfred, brother to Brad Pitt’s Tristan in “Legends of the Fall,” also starring Anthony Hopkins. Quinn is a successful working actor and at the same time has managed to keep his private life just that – private – avoiding the Hollywood scene. He is married to Elizabeth Bracco and has two daughters, Ava Eileen and Mia. His latest film, “Across the Line: The Exodus of Charlie Wright,” co-starring Andy Garcia, Mario Van Peebles, Gina Gershon, and Danny Pino, will be available on DVD and Blu-ray December 7.

(The following interview has been edited for print purposes.)

Mirror: You starred in “A Shine of Rainbows,” a beautiful film recently screened as part of the Irish Film Festival, in which you gave a stunning portrayal of the husband, “Himself.” Is it going into general release?

Quinn: It was (laughs). It’s come and gone. Like so many independent small films, it had a short, quick release. It was a fun part and Donegal, Ireland is one of my favorite places in the world. I’ve lived in Ireland, but I never got to visit that part of Ireland before and it was a great thrill to do that.

Mirror: Charlie Wright, the character you portray in “Across the Line,” which we understand is loosely based on Bernie Madoff, is a pretty despicable human being who bilked people out of billions of dollars with his Ponzi scheme, but in the film he comes off as a really likeable guy. Did you have any misgivings about not revealing that evil side of him?

Quinn: No, because I think it’s about redemption. It was important to have that moment when his self-loathing is revealed when the Claudia Ferri character tells him he’s a good man with a good heart and he says that she has no idea about how bad he really is. You see this man at the end of his rope and you eventually understand why nothing means anything to him anymore. It comes down to what is his life all about. What is the meaning of his time on this planet? Another aspect of the character that I found interesting was his quest to find his daughter, whom he fathered many years ago and never met.

Mirror: You shot in Tijuana, which is a pretty violent city. Did you feel safe?

Quinn: I did feel safe because bodyguards were provided for security. At the same time, I felt a tremendous amount of compassion and sadness for the everyday people who worked on our film, the neighborhoods we went into, the incredibly low wages that they work for, and how this whole drug cartel problem is hurting them so badly economically because no “gringos” are going there. I felt bad about all these things and felt glad that we were providing work, but it’s a tough situation down there.

Mirror: You’ve done a ton of films and have worked with a lot of directors. R. Ellis Frazier (“Across the Line’s” director) said he didn’t give a lot of character direction. Would you have wanted more direction?

Quinn: You know, I’m 51 years old and have been doing movies for 29 years. I don’t need a lot of help. It’s nice to get it when I need it and I’m always open to someone who wants to challenge me to go deeper or wilder or take more chances as an actor, but I think the director’s main job is hiring good actors and then shaping the music and beats of the scenes because good actors, given the opportunity, are going to do good work. I think the director’s job is about shaping the rhythms and creating a good working atmosphere.

Mirror: Is it easier to work with a smaller crew?

Quinn: It isn’t about the size of the crew. You can have a crew of 300 as long as it’s a comfortable working set. The working condition that’s most beneficial to me is where you have a safe environment in which to act and you feel like you can do your work. So, when it’s chaotic and you see 14 crewmembers walking back and forth while you’re trying to do a one-on-one delicate scene, that’s difficult. A lot of the time we were stealing shots in the streets of Tijuana where people didn’t even know we were shooting. My favorite situation is where we have a sacred space where we get to play.

Mirror: When you decided to do the film, did you know it was going straight to DVD and Blu-ray?

Quinn: I make my living doing independent films and in the last couple of years you really don’t know if any film is going to get distributed unless it already has a signed, sealed, and delivered distribution deal.

Mirror: Where did you get your training?

Quinn: I trained a little bit in Chicago with a man named Byrne Piven and his wife Joyce at the Piven Theatre Workshop. They are actually Jeremy Piven’s parents. Then I studied with Sanford Meisner, which I guess is the Method. I also learned Viola Spolin’s Theatre Games, which is a great acting foundation. But really, I started working in theatre when I was 19 and I basically learned by practicing my craft.

Mirror: Doing Theatre Games is a great tool for actors as it frees you up to be spontaneous and to work outside-in as well as inside-out. Do you agree?

Quinn: Yes. Exactly. And it also teaches you how to play.

Mirror: You have 12 or 13 films in the works. How do you find time to be involved in so many projects?

Quinn: Some of the roles are supporting roles, which are fun, but the truth is I have to keep working. I’ve got kids, a mortgage, you know, financial obligations.

Mirror: The more times we see you on screen, the better.

Quinn: Thank you for that….