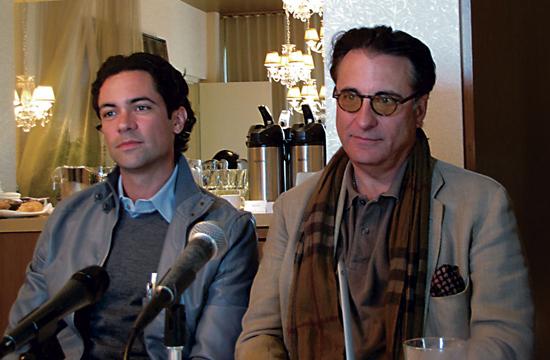 Andy Garcia is one of Hollywood’s most respected and talented actors, having starred in an array of successful films including “The Untouchables,” “Stand and Deliver,” “Black Rain,” “Internal Affairs,” “The Godfather: Part III,” the critically acclaimed “City Island” and many, many more. In his latest film, “Across the Line: The Exodus of Charlie Wright,” Garcia plays Jorge Garza, a Mexican drug boss pursuing Aidan Quinn’s character (the title role), who is on the run after being exposed as a perpetrator of Ponzi scheme on the level of Bernard Madoff.

Joining Garcia in the film, as his younger brother Gabriel Garza, is actor Danny Pino, who is probably best known for his recurring role on TV’s “Cold Case.”

The following interview, which has been edited for print purposes, took place at a recen press conference.

Mirror: What attracted you to this role?

Garcia: In every part, you have an initial reaction to the material. I had worked with Ellis (R. Ellis Frazier, the director) on “La Linea – The Line,” co-starring Ray Liotta. Ellis writes very nicely and I had a good time working on that film. So, when I read the piece, I had an idea about my character. Coincidentally, I was actually growing a beard for another part I was going to do in Mexico and when I read the part of Jorge Garza, I had an immediate image of this bearded man walking around Mexico always dressed in white. So that was my first impression. The sub-conscious elements of why you are attracted to a character begin peeling away as you start concentrating on the role and you discover the character’s faults and where his pain is. I also liked the relationship with the younger brother.

Mirror: What was the deciding factor in taking the role?

Garcia: I talked to Ellis about having Danny (Pino) play my younger brother, but I didn’t commit right away. At that time, Aidan (Quinn) was not involved and I told Ellis that he had to have an actor who would compel you to watch the story and when he found that guy, I would do it. Movies are about the protagonists. The other characters are there to create obstacles for them and to contribute to the story, but you’re really following this one man and his interaction with the other characters

Mirror: Aidan said the only reason he did the part was because you were attached to the film.

Garcia: It’s mutual. When Ellis called me and said Aidan was doing the role I said ‘I’m in.’ I have great deal of respect for him. He’s a great actor and we’re friends.

Mirror: You’ve directed films as well. Did you give input and did you receive a lot of character direction?

Garcia: Directors always collaborate with their actors about what’s going on in a scene. Actors come in with a certain energy and we’re all interested in film making so it becomes a collaboration. I did give some suggestions. It’s was hard sometimes as Ellis had such little time to finish the movie because of the way it came together and the budgets, etc. At times you get locked into this small world and you need someone to say, ‘Hey have you thought about a cheeseburger instead of a club sandwich?’ Occasionally it takes someone over your shoulder to point something out.

Mirror: How did that actually manifest on the set?

Garcia: Ellis wrote the material and he let us play. He’d say ‘What do you want to do?’ So we would talk about it and then he just stepped back. To me the greatest directors trust their actors. They want to see what the actors have developed. They might have a specific idea about a shot, but most of the time it’s kind of worked out as far as the staging that generally begins to build in an organic fashion. Hal Ashby was one of the first guys I worked with in that way and he once said, ‘As a director when you give an actor a piece of direction, 99 percent of the time you’re doing him a disservice.’

Mirror: What was the most difficult scene and were there any special challenges in shooting in Tijuana?

Garcia: We shot all my stuff in Los Angeles so you have to ask Danny about that.

Pino: You’re dealing with a language barrier sometimes. I speak Spanish so I was in my element, but you’re contending with the weather, the sun, the clouds, etc., so in working with a director like Ellis, who has an improvisational approach to his work, you also have to work with the elements in the same way. The most challenging scene was the market sequence where we’re trying to capture Charlie (Aidan Quinn) before anyone else does. We only had around 50 background artists who had to make it look like a populated, legitimate Tijuana marketplace. The sun was coming down and I remember saying under my breath ‘we’re never gonna’ get this.’ But we did.

Mirror: Were you ever worried about your safety?

Pino: Not really. Every actor had a shadow the entire time and the set was pretty much blocked off. I stayed across the border in San Diego, so it felt safe.

Mirror: You had to go to some pretty difficult dark places as the character. How did that work for you?

Garcia: There are certain doors you have to open as an actor. When you go to those places, sometimes they open easily and are available to you, especially when the gods of inspiration might be on your side that day. Those scenes are painful and to get there you have to think about personal things, use substitution, and live emotionally in imaginary circumstances and make it very real for yourself. It’s not easy, but it’s part of the craft that we are trained to do.

Mirror: This film is going straight to DVD and VOD instead of a theatrical release. Did you know that when you entered the project and did you have any qualms about it?

Garcia: No. The project is the thing for me. That’s like saying are you willing to work on cable as opposed to network television. It’s very difficult to get a distributor these days. You have to go where the material is and what stimulates you. I hang my hat on a quote I once read by William Saroyan. He was asked if he cared if his plays are successful and he said, ‘The fact that my plays exist is success enough.’ I think that’s why I make movies because I want them to exist. Not to say that you don’t want them to be successful, but it’s more of a curiosity. It’s a piece of art. You know Modigliani died broke and now his paintings sell for $50 million. The point is you create something you care about and then throw it out there and see what happens.

Mirror: Do you think there’s a moral message to the film?

Pino: I think there’s definitely a message of redemption. The character bilked billions of dollars out of his investors and is trying to make things right, both personally and professionally.

Mirror: The relationship between you and Danny as the brothers was beautifully developed. Did you spend a lot of time together off the set?

Garcia: We watched football games together (laughter). Usually, you have to cultivate a relationship or use substitution, but in the case of Danny, he’s like a brother to me so I knew he would make me look good.

Pino: I knew all I had to do was to link my train to his and go along for the ride. He’s always been someone I’ve looked up to and that’s what my character does.

Mirror: Did you ever want to do anything else beside act?

Garcia: No. This is what I trained to do. I could certainly do other things, but I’m not interested in anything else other than acting, filmmaking, and music. I don’t think I could make a living playing golf or fishing so I had to do something where someone was actually willing to pay me (laughter).

Mirror: What are you doing musically?

Garcia: I started my band and we played three weeks ago. I do want to make a recording, but I’m a little sidetracked as I’m trying to get financing on a movie I wrote about Hemingway which I plan to direct. Sir Anthony Hopkins is attached to it so I’m kind of in the fund-raising mode right now. You have any cash (laughter)?

Mirror: We’ll take up a collection.

Next week, Beverly Cohn reports on a more exclusive, up close and personal conversation with Andy Garcia, about his private life. .