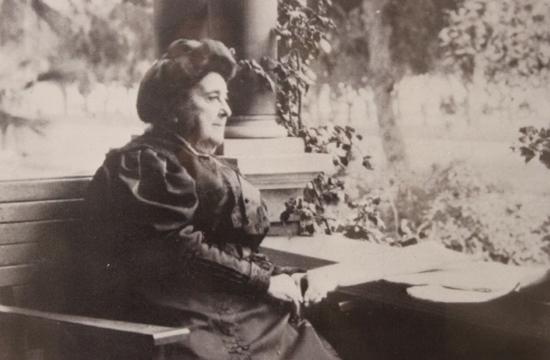 I wish I could time travel, sit with Arcadia Bandin on the porch of her home on Ocean Avenue, and talk about her life. I would tell her that her gifts to the city have given shape and meaning to Santa Monica.

I can only study the accumulated facts and imagine what it might have been like to be the daughter of a prominent Ranchero family in Alta, California, to witness the change to Statehood, and see the transformation of California.

Arcadia’s aesthetic and social vision set a standard for Santa Monica. Palisades Park, originally named Linda Vista, was her vision and she donated the land from Colorado to Montana for the park. Then, the company she co-owned with Nevada Senator John Percival Jones donated the land from Montana to the northern end of the city to complete the park.

Arcadia was born in 1827, the daughter of Juan Bandini and Dolores Estudillo, a prominent and powerful family who owned ranchos in San Diego. In a decision, not unusual for their time and the standing of their family, Arcadia was married, at age 14, to a business acquaintance of her father’s, Abel Stearns.

Stearns, born in Massachusetts in 1799, had come to Alta California to make his fortune. He became a Mexican citizen, which required converting to Catholicism and speaking Spanish. As a Mexican citizen he could then hope to achieve both social and political standing.

According to Arcadia’s grand-nephew, Ricardo Bandini Johnson, “Arcadia was known to be generous and likeable and very close to her family. Stearns was often away – both for business and for health reasons – and did not pay a lot of attention to Arcadia.”

Stearns died, in 1871, at the Grand Hotel in San Francisco. Arcadia continued running the businesses. Four years after the death of Stearns, on April 25, 1875, she married Colonel Robert Symington Baker, a wealthy sheep rancher and a prominent landowner.

That same year, Baker started construction on the namesake Baker Block. Baker wanted a grand home and replaced El Palacio with a three story, 64,428 square foot building. The first two floors were rented for commercial businesses and offices and the top floor was the residence.

An ornate building, it expressed the aesthetics of the ‘Gilded Age’ in which they lived. The large, land–grant families: Sepulveda, Reyes, Lugo, Machado, Wolfskill, who donated the land for the VA cemetery: Carrillo, Pico, Figueroa, Kinney, and Rindge were frequent guests at their famous dances and parties.

Baker owned rancho San Vicente, bought from the Sepulveda Family for $55,000. The Rancho included all of Santa Monica and its borders were Pico, Sepulveda, Topanga, and the Pacific Ocean. Two years later Baker sold a portion of the rancho to Senator Jones for $162,500. Jones described Rancho San Vicente as the “most beautiful place I have ever seen.”

Baker and Jones filed a Platt map for the first subdivision of Santa Monica. The 50’ by 150’ lots, located between Ocean Avenue, 26th Street, Montana Avenue, and Colorado Avenue, sold at land auction for $150 to $300.

Arcadia Bandini’s vision for the city, as well as her business acumen, is demonstrated in the lay out of the Platt map. Lots were designated for housing, schools, parks, churches, and businesses. Parks and school sites were deeded to the new City.

Ricardo Bandini Johnson says, “Arcadia and Jones were the main force behind the donations. Jones however, was mostly in Washington D.C., and Arcadia Bandini and Georgina Jones became close friends and partners in the family business.”

In the 1880s Arcadia builds her home on the 1200 block of Ocean Avenue overlooking Linda Vista Park and the Pacific Ocean. She keeps the Baker Block, but mostly lives in Santa Monica. Many members of the Bandini family continue to live in the Baker Block.

Arcadia’s life is one of business, grand entertaining, and family. She spends time at her working sheep ranch where there are extensive gardens and opportunities for guests to hunt. She frequently goes to the beach.

In 1892 Arcadia’s brother Juan Bandini comes from San Diego to work with Arcadia and stays, becoming her most trusted advisor until his death in 1906. He was her closest friend and she deeply mourned his death.

Arcadia continued to live and work in Santa Monica until her death in her home on Ocean Avenue, Sept. 15, 1912. Senator Jones, her long time business partner and the husband of her close friend, Georgina Jones, died the same year.

Dona Arcadia Bandini de Stearns de Baker is buried in the Bandini family plot at Cavalry Cemetery on Whittier Boulevard in Boyle Heights, alongside her father, Juan Bandini, and her husbands, Abel Stearns and Robert Baker.

Arcadia Bandini made donations of land, all over the Los Angeles – region to be used for parks, schools, orphanages, and other projects that were of public benefit. As there was no facility for veterans of the Civil War west of the Mississippi, she donated the land for the National Home for Disabled Volunteer Soldiers and Sailors (now the Veteran’s Administration).

Arcadia Bandini’s thoughtful and generous gifts to Santa Monica were instrumental in determining the character of the city. We are the beneficiaries of Arcadia Bandini, of her generosity and her aesthetic and social vision.

*Ricardo Bandini Johnson, the great nephew of Arcadia Bandini, shared his family’s history. I couldn’t have told Arcadia’s story without his generosity.