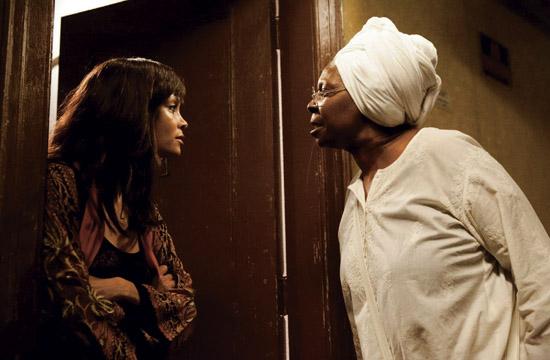 The cast alone makes “For Colored Girls” worth seeing. Based on Ntozake Shange’s powerful choreopoem, “For Colored Girls Who Have Considered Suicide When the Rainbow is Enuf,” Tyler Perry’s screenplay (Perry also directed and wrote the film) does not hold a candle to the original text, but there are several wonderful moments where Shange’s gorgeous words rise above the mediocrity of Perry’s adaptation.

Debuting in 1974, Shange’s play combines dance, poetry, and music, all of which culminate in a sad, rage-inducing, joyful celebration of the black female experience. Women of all races and ethnic backgrounds embraced the show for its in-your-face, tell-it-like-it-is candidness. Rape, poverty, and overt expressions of sexuality were just a few of the issues placed center stage by the revelatory piece.

The major problem with the film is the fact that the story is meant to be told on stage, performed as a bare-bones spoken word piece. Stark staging and simplicity of storytelling are what make the original play so powerful. In Perry’s adaptation, weak, melodramatic story- lines knit the characters together in ways that detract from their individual tales. Perfect poetry gets buried under creaky plot lines. Still, the actors – Janet Jackson, Phylicia Rashad, and Whoopi Goldberg to name a few – deliver the dramatic goods no holds barred. Loretta Devine is the obvious standout, imbuing her character with equal parts pride and folly.

Be prepared for stories of shame, violence, and loss. Jackson plays a woman whose husband contracts AIDS by sleeping with other men. Kimberly Elise’s character sees her children murdered by her spouse. Thandie Newton plays a woman whose promiscuity knows no limits. Macy Gray plays a backroom abortionist whose soul has been destroyed. At the film’s outset, the women are divided, mostly unwilling to help and support one another. When they begin to come together in the interest of healing through sisterhood, the outcome is poignant.

Various settings keep the story humming along at a nice pace and give it layers that please. Each character symbolizes a color of the rainbow, and Jackson’s character is clearly red; her upscale office and swanky home are peppered with lush red roses, lending visually spectacular heft to her tale. When we travel to Harlem, things go from bright and brilliant to dark and dirty. A dingy tenement is home to several of the more down-and-out characters.

Though the story is essentially one about the female experience, actor Michael Ealy plays an abusive war veteran, showing up with a powerful performance that reminds us that the male experience has its own unique anguishes. His character’s abusive nature derives from post-war trauma and a feeling of helplessness. It’s painful to watch.

It is to Perry’s credit that he does not pull punches on presenting the awful, ugly images of violence against women. It is also laudable that he got this film made – it’s not a story that’s ready-made for Hollywood and it took someone with Perry’s standing to get the job done.