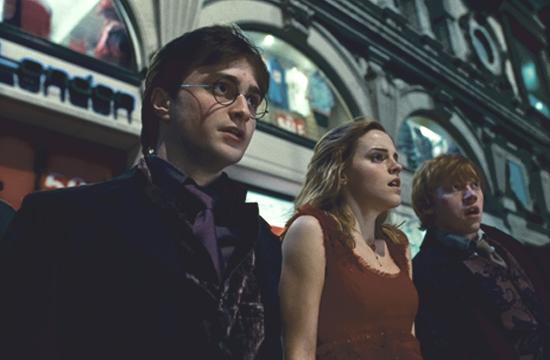 The final book in the mega-hit Harry Potter series is so dense that the film had to be divided into two parts. This Thanksgiving, a great bet for family fun is a viewing of “Harry Potter and The Deathly Hallows: Part I.” A boy wizard hunting down and being hunted by the forces of evil is just the right fantastical fare for the after-turkey malaise. Be warned, the movie is two-and-a-half hours long, a runtime that includes some painfully slow sequences.

As the final tale of Harry Potter begins, Harry (Daniel Radcliffe), Ron (Rupert Grint) and Hermione (Emma Watson) are in hot pursuit of the evil Dark Lord Voldemort’s (Ralph Fiennes) life-giving objects, the Horcruxes. Audiences first met these three friends when they were unskilled elementary school kiddos, a trio stumbling through potions, spells, and wand wielding. In “Hallows” the three naïve children have grown into sharp minded teenagers and gifted practitioners of wizardry. Thus, though they travel a long, perilous road to defeat Voldemort, they have enough rough edges and street smarts to fend off foes.

As the three teenagers traverse mountains, forests, and all manner of treacherous landscape – they sleep in a tent pitched in the dark of night at various points on their journey – there is big trouble in the wizard world. Voldemort is waging war against the forces of good, threatening to destroy Harry’s school, Hogwarts, and striking fear into the hearts of all who oppose him. As Harry and his crew pursue the Horcruxes, the destruction of which will topple Voldemort, the dark lord has sent his own crew of bounty hunters to take down our bespectacled hero.

Director David Yates, who took over the helming of the “Harry Potter” movie franchise with 2007’s “Order of the Phoenix,” (Chris Columbus, Aflonso Cuaron, and Mike Newell all directed previous Harry Potter films) does a decent job of getting down to the dark, nitty-gritty stuff of this decidedly grim installment in the series. But time passes much too slowly during the scenes when we’re tracking Harry and his friends over hill and dale. It would have been nice to see a bit more smart magic and a bit less of the budding romance between Ron and Hermione.

That said the visuals are spectacular and there’s no shortage of good-versus-evil lesson teaching. The black magic employed throughout, however, begins to feel slightly clichéd. Fiennes chews the scenery like a cat lapping up milk, but he somehow feels put on, a caricature of an evil force personified.

Still, Harry’s fans will be satisfied with the film’s commitment to the book, and the cliffhanger ending will certainly leave them wanting more. Very young children will be frightened by the bad guys and their aggressive, relentless tracking tactics, while adults will enjoy the brilliant performances of Alan Rickman and Bill Nighy.