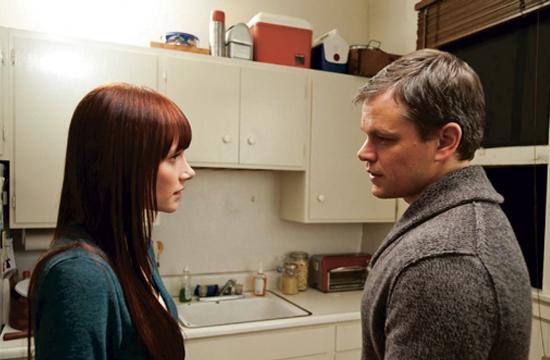 As a director, Clint Eastwood has told myriad soulful tales. There’s the story of a female boxer unwilling to be pigeonholed (“Million Dollar Baby”), a washed-up cowboy seeking justice (“Unforgiven”), a narrow-minded curmudgeon with a heart of gold (“Grand Torino”), and a soccer team that rallied for a place in history (“Invictus”). Now the seasoned filmmaker, who, well into his twilight years, is still a major movie star, brings us a touching tale of the afterlife.

“Hereafter” finds Eastwood pairing once again with Matt Damon, who plays George, a retired psychic with an extraordinary gift who is hiding behind a low-wage job and an everyman lifestyle. Turning his back on his ability to link the living with their dead loved ones, Damon toils away at a construction job, trying to live an ordinary life lest he be doomed to dealing with death every second of every day. As George lays brick and hides out, a French journalist, Marie (Cecile de France) experiences a tsunami halfway across the globe. Haunted by an otherworldly vision she had while battling the fatal wave, Marie becomes fascinated with the afterlife. As we watch George and Marie struggle with their vague understanding of how souls function in the afterlife, we meet a third character impacted by death, Marcus (George McLaren), a young British boy who loses his brother.

The three stories unfold slowly, but the pace does not feel snail-like. In fact, the effect of Eastwood’s careful, understated storytelling is riveting. We feel invested in these three journeys because the travelers feel like ordinary humans, people next door or down the street. It’s particularly heartbreaking to witness Marcus, played to stunning effect by the stoic, little McLaren, search and search for his dearly departed twin brother, his other half without whom he can’t function. Damon, as usual, offers a performance that showcases his careful attention to character building and detailed craft. From the blue-collared, South Boston wiz kid that was Will Hunting to this heartbreakingly confused spirit-whisperer, Damon treats all of his characters with the respect they deserve.

Peter Morgan’s (“Frost/Nixon,” “The Queen”) script is a thoughtful musing on the circle of life. When the three stories collide, the outcome is entirely pleasing and believable. It’s a joy to see how the seemingly separate yarns converge to create a tapestry about mourning, surviving, and searching for love, even as death is ever-present.