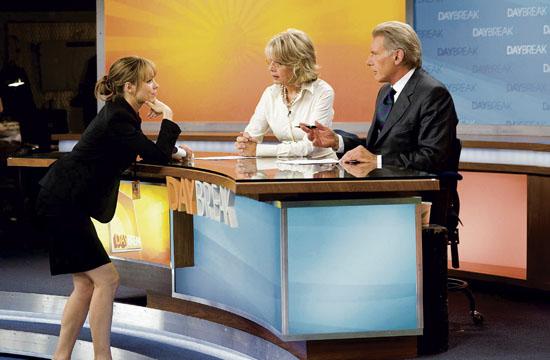 Though Harrison Ford and Diane Keaton are the two big names linked to “Morning Glory,” the films standout performance comes from the less experienced Rachel McAdams.

Becky Fuller (McAdams) is a television journalist with big dreams. As a peon producer on a New Jersey news show, Fuller is eagerly awaiting her shot at a higher level position. She has put oddball hours into a thankless, low-level job, crossing her fingers for a big promotion. She has also sacrificed any semblance of a social life and traded romance for news chasing. At the movie’s outset, it looks like our hard-working, semi-geeky, plain Jane is about to climb the ladder and achieve her dreams, but the good news she’s anticipating turns out to be a pink slip. What follows is a depressing montage of sorts, a series of sad scenes in which Becky fruitlessly hunts for a job. Since we’ve already witnessed her deep devotion to her work, we are devastated right along with her. McAdams is superb at eliciting compassion from the audience – something as simple as an awkward habit of fiddling with her bangs plays as pure acting genius.

When Becky finally lands another TV gig, it’s as executive producer on the lowest rated morning show in television. Determined to turn things around, Becky fires one of the show’s longtime anchors for his unwillingness to attend meetings and his bad habit of coming on to women in an oh-so-creepy way. Next, Becky uses all her pluck to land famed news anchor Mike Pomeroy (Ford) to replace the longtime anchor she fired on her first day. The major problem with this new plan is Pomeroy’s unwillingness to do the cheesy morning show shtick after his illustrious career covering hard news, interviewing heads of state and embedding himself with the military during major wars. In short, he’s a news snob, a bad fit for morning show pet tricks, weather stories, and feel-good fare. But he has street cred, he likes money, and Becky finds a loophole in his contract that essentially leaves him with no choice but to join her lowly news team.

Ford is fun to watch as the crotchety, self-important news man, but the character leans more toward caricature than authentic human being. Playing Ford’s co-anchor, Colleen Peck, is Diane Keaton, who positively shines in the role, sneering, smiling, and schmoozing her way through the film with all the gleeful ease that only an accomplished actress of her caliber can summon.

Patrick Wilson also has some nice on-screen moments as Adam, Becky’s love interest, a kind-hearted hunk who’s more interested in brainy Becky than the bombshell blondes who pursue him like dogs chasing meat. In an understated but effective performance, Wilson shows us that hot guys can be sweet and smart too.

It’s a shame that the screenplay goes from fresh to stale about halfway through. In the beginning, we get the feeling that Becky’s story is one that won’t end with all loose ends neatly knotted. But formulaic storytelling takes hold around the midway mark and we see all the messy strands of Becky’s life begin to come together to create a perfect bow of an ending.