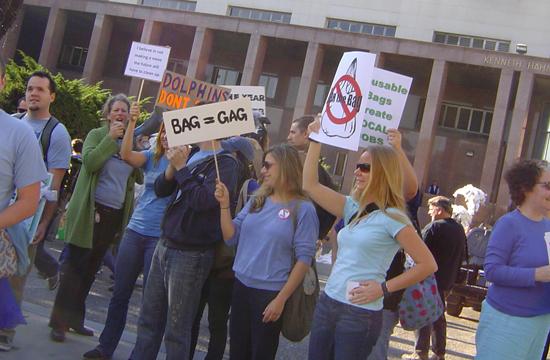 The Board of Los Angles County Supervisors banned the use of single use plastic bags throughout the unincorporated parts of the county on Nov. 16.

The supervisors approved the ban because county retailers failed to meet the voluntary reduction targets, which were set by them in 2008, of at least 30 percent by July 2010 and 65 percent by July 2013. Single use plastic bags will start to be phased out in supermarkets, large retail pharmacies, liquor stores, and food marts beginning July 1, 2011. Paper bags made out of 40 percent post consumer content will be made available at all these locations for a fee of 10 cents. The ban will be extended to smaller stores, pharmacies, and convenience stores in January 2012. The goal of the ban is to encourage shoppers to use reusable bags.

Prior to the vote, ban supporters who were organized by Santa Monica based Heal The Bay, rallied on the main entrance steps of the Los Angeles County Hall of Administration. Supervisor Zev Yaroslavsky whose district includes Santa Monica told the gathered crowd, “We would of preferred to have a statewide ban.” The State Assembly approved Assemblywoman’s Julia Brownly’s AB 1998 bill, but the State Senate vetoed it in August. He then noted that the Supervisors’ ordinance “was pretty much patterned after Julia’s bill. The Environmental Impact Report we will certify today will allow every one of the 88 cities in Los Angeles County to approve their own ordinances that are patterned after ours.”

The crowd also heard from Brownley whose district includes Santa Monica. She emphasized that if the ban were passed, Los Angeles County would be the largest county in the United States to rid itself of its nasty plastic bag habit. This will also set the tone for us to go back to Sacramento with the same historic coalition … to win our environmental fight all over California. The days of plastic bags are numbered.”

The City of Santa Monica considered a proposed ordinance to ban the use of single-use plastic bags in the city in 2008, but delayed its consideration so that a Master Environmental Assessment (MEA) could be done with other California counties and cities. The MEA was completed in March of this year, but the City kept postponing its reconsideration of its ordinance.

Heal The Bay president, Mark Gold said, “Waiting on the ordinance was a negative” for Santa Monica because now the City’s proposed ordinance would be illegal due to the passage of Proposition 26. This proposition requires that certain state and local fees be approved by a two-thirds vote. The City’s ordinance included a 20-cent fee for paper bags and three cents of that fee would have gone to the City.

A 2008 Santa Monica City staff report stated that a ban is being sought because plastic bags are a significant part of the litter in the environment. It also noted that plastic bags could easily be carried by wind and water. Therefore, they are large contributors to the free-floating plastic debris in marine environments because they do not biodegrade. Marine animals frequently mistake plastic bag pieces for food or become tangled up in plastic bags. Ban supporters also mentioned these reasons at the Board of Supervisors meeting.

Opponents of the ban told the board it was wrong to implement a ban during a recession because people who work for plastic bag manufacturers could lose their jobs. In addition, it would cost customers who didn’t use reusable bags additional money for paper bags, plastic liners for trash receptacles, and for other products they currently reuse single-use bags for. Others were concerned that some reusable bags contain toxic chemicals such as lead and cadmium that could get into products transported in them.

A new California law, AB2449, went into effect July 2007 that required supermarkets and other retail stores that are greater than 10,000 square feet with a licensed pharmacy to collect, transport, or recycle plastic carryout bags, and to have reusable bags available for sale.

California taxpayers spend over $25 million annually to collect and landfill the more than 19 million plastic bags that are used in the state each year.