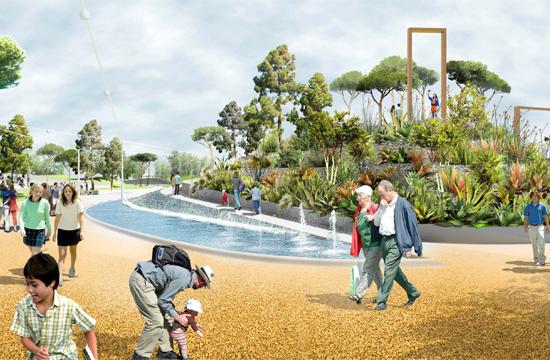 Designers and staff unveiled the latest expansive design for the downtown Santa Monica Civic Center Parks combining varied concepts and input from hundreds of residents during the last five months.

The project site encompasses roughly seven acres in the heart of Santa Monica, from the footsteps of City Hall to Ocean Avenue and from the 10 Freeway to the future Olympic Drive. The Palisades Garden Walk and Town Square, as it is formally named for the time being, is designed to be Santa Monica’s own iconic attraction on the level of Central Park in New York or Millennium Park in Chicago.

The envisioned park has overlooks, sprawling gardens, wall waterfalls, and mixed-use bike paths are a few of the favored features, said James Corner of the New York-based design company James Corner Field Operations during a presentation at Santa Monica High School Cafeteria last weekend. Corner explained the months of redesign to incorporate three designs shown before the Parks and Recreation Committee, the Planning Commission, and Santa Monicans in September.

This time around the municipal bodies met with the public once again to see how praise and criticism altered the anticipated outdoor space.

“[The Parks] will be iconic and something people will recognize as an open space,” Corner said. Every detail for the grounds have been scrutinized and thought out with purposed. For example, the entrances are designed to “attract people so we have people in the park each day, using it.”

The site is set to be a destination as well as a landmark, said Corner. The parks loosely divide into different sections to allow for specific activities and “smaller more intimate spaces.”

The arrived upon design them; called the Arroyo Wash, as an acreage focuses on circulation within the park and between downtown and the ocean. Based on the previous community workshop design elements, elevated overlooks toward the ocean and City Hall remained pivotal in the design. Also native garden areas and a dense tree canopy will envelop the grounds with shade. Water features, including a stone-wall waterfall and shallow reflecting pool in front of City Hall, will be built to conserve water, as well as create sound, Corner said. Trees and plants will be seasonal, native, and sustainable varieties.

“It’s not just filler, but will have sculptural form to bring not just shade but figure,” Corner said.

Another popular feature are the trellises, which are hanging cables in the canopy providing unique lighting in the park. The proposed trellis lighting will run from City Hall toward Ocean Boulevard, branching a “constellation of lights” over the tree canopy, Corner said. The innovative design element will accompany the sculptural look of sycamore and fig tree forests that create an organization of canopy trees.

In order to garner public participation, residents split into groups after the Corner’s presentation to comment on specific design elements and propose alternatives to the parks. Planning Commissioners, Committee members, and design team partners sat at every table to collaborate with residents and answer questions on possible changes to the parks. Representatives from each group then shared the gathered suggestions.

“We are trying not to be specific [therefore] squashing public input,” said Joe Conaty, partner at the city-hired architect firm Frederick Fisher and Partners, the same group that worked on the Annenberg Community Beach House.

A designated mix-use 12-foot bike and walking path will connect Olympic Drive to Ocean Boulevard, offering an often contested space for cyclists to travel through the grounds. Chris Arroyo, a Santa Monica resident, said that with the added bike traffic, a light needs to be placed at Olympic Drive to integrate cyclists with motor vehicles upon leaving the park.

Residents stressed the importance of trying to maintain safety in the parks and keeping homeless from camping in the space as some of the more prominent concerns. Conaty explained the parks will have hours and be patrolled once closed. Overnight camping will not be encouraged, a far cry from the current Palisades Park that draws tourists and homeless alike with its open space.

Lori Nafshun, board member on the Pier Restoration Committee, asked for a entrance connecting the northwest corner toward the new mall, Santa Monica Place, to draw people walking from the Third Street Promenade into the new park. Other residents echoed a need for paths with better north-west connectivity, a sentiment shared by Planning Commissioner Jason Parry. Nafshun also called for a water feature designed just for children to play in. Other residents applauded the climbing wall and children’s area for for being more than a simple area with “just a swing set.”

The Arroyo Wash design needs to be approved before the Santa Monica City Council, who will give their own input on the grounds before any planning can be finalized. Workshop number four concerning “Design Development” will be held Saturday, Jan. 29, 2011 at 1 p.m. in the Civic Auditorium.