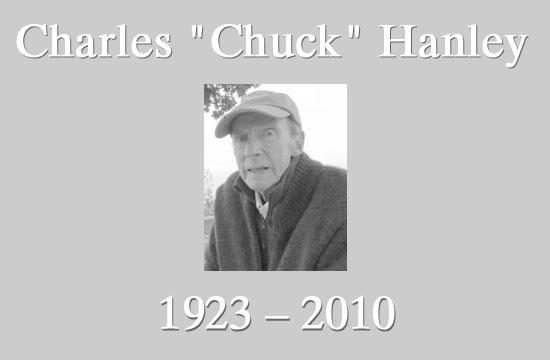 He had suffered a sudden stroke on October 29 and fought hard for 8 days, but the Lord took him home at 12:30 AM early Saturday morning.

Charles leaves his beloved, older brother, John Joseph Hanley, 90, whom he lived with for 50 years on San Vicente Blvd. Almost every day, John and Charles would walk from their apartment to Palisades Park where they would enjoy talking and watching the neighborhood life. The two brothers were known and treasured by many friends.

There will be visiting hours and a wake for Charles on Sunday, November 14 from 2PM to 4PM at Gates Kingsley Gates, 1925 Arizona Ave, Santa Monica, CA 90404.

Visitors can use the main entrance on Arizona.

The Funeral Mass will be held at 10AM on Monday, November 15, at Saint Monica’s Catholic Church, 725 California Ave, Santa Monica, CA 90403.

Internment will be at Calvary Cemetery in Youngstown, Ohio with the Hanley family.

Charles was born in Youngstown, Ohio in 1923, son of James Francis Hanley and Margaret McGarry. The two families came from Ireland and immigrated to Steubenville, Ohio between 1863 and 1869. They had 10 children. Charles was the youngest.

After graduating from Ursuline High Academy in 1942, Chuck worked at Youngstown Sheet and Tube, and then General Fireproofing. He attended Youngstown State University, taking courses in Pre-Med and Accounting. Chuck was a devout member of Saint Columba’s Catholic Church in Youngstown.

In 1943, he joined the Army Air Force to fight for his country. Due to a severe hearing loss, he had to return to Ohio. With his talent for math and honest reputation, he was hired by the Youngstown Post Office.

As the youngest of the big Hanley family, Chuck continued to help his aging parents at home on Woodbine Avenue. In 1958, he moved with his mother to the San Vicente apartment in Santa Monica. He cared for his mother at home during the rest of her life.

Chuck worked at the Santa Monica Post Office for 23 years, and was known for his integrity and work ethic. People who knew Charles Hanley would say he was one of the nicest guys you could meet, easy-going, and even-keeled. He took hardships in stride and knew how to get along with everyone.

Chuck’s strong faith and Saint Monica’s Church were vital to him. He was intensely curious about life, the world around him, and the future. Charles was a truly generous man. He watched out for people and always tried to help others first. He was the kind of guy you could trust and count on. We will miss him, and will remember him always.

Chuck was preceded in death by his mother and father, and 7 brothers and sisters, Robert, Francis, Catherine, Duke, Margaret, James and Bob. A brother Ed, of Las Vegas, has been missing since 1945. He leaves his nephew, Bruce (and Angela) Walker, DDS of Rolling Hills Estates, CA, great niece and nephew, Jeffrey and Jennifer Walker, nephew, James “Biff” (and Nancy) Hanley of Lancaster, Ohio, Patty Smith and Elaine Hanley of Canal Winchester, Ohio, along with many great nieces and nephews who never got a chance to know the great guy Chuck was.

We ask the Lord to watch over his brother, John, and keep him safe, until they meet again.