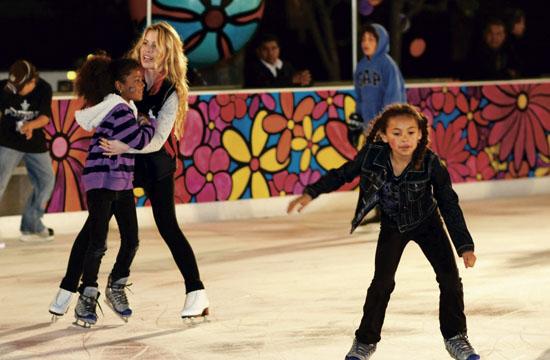 This was the first year the rink was turned into a public art exhibition developed through the collaboration between the Portraits of Hope and Herbal Essences. The exhibition consisted of colorful hand painted flowers made by children from hospitals and schools from around the Los Angeles area.

Two brothers, Ed and Bernie Massey, founded Portraits of Hope in 1995 to merge the production of public art works with creative therapy for children and adults who are dealing with adversity.

Tara Lipinski, 1998 Olympic gold medalist figure skater, said she chose to participate in the grand opening because she lives near by and thinks its “a great opportunity for kids to start skating.” She is currently a commentator for ladies figure skating. 2006 Olympic silver medalist ice dancer, Tanith Belbin, came “to celebrate the collaboration with Herbal Essence.” She is now touring with Stars on Ice.

Kathleen Rawson, CEO of the Bayside District which helps promote the economic stability, growth, and community life within the Bayside District and Downtown, said it cost about $250,000 to $350,000 to put up and operate the rink each year. They hope to at least break even with the fees they charge people to skate and to host special events there. They try to keep the skating fees low so they can “be accessible to the broadest range of community people,” and so they will come back again and again. This is the fourth year the rink has been in downtown and in years past it has attracted as many as 250,000 people, including spectators. Many people like to drop off their kids, especially middle school students, while parents shop in the nearby stores.