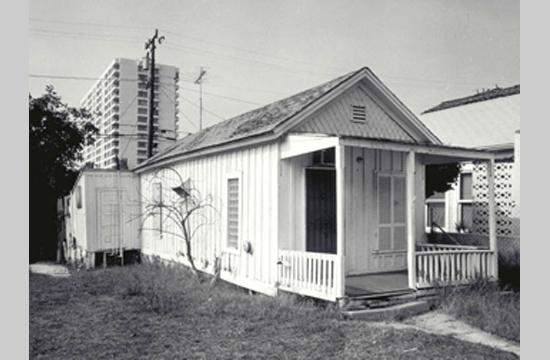 A landmark “shotgun house” found a new home only one block from its original construction place at 2520 Second Street near the Ocean Park Library.

The historic building will house the Santa Monica Conservancy Preservation Resource Center as both headquarters and public resources center open to the community.

In 1999, the City took over ownership of the house after designating it a landmark, as a “last of its kind” representation of this housing-type in the City. The style is typical of such cottages that inhabited the streets a few blocks west of the beachfront more than 100 years ago. If you shot a gun through the front door, the bullet would come out the back door without touching a wall, hence the name “shotgun.”

In Santa Monica in the 1870s Santa Monica and Ocean Park were separate towns. Real estate developers who sold lots in the newly subdivided cities knew that people coming to live or vacation from nearby Los Angeles sought alternatives to tents or hotels to live in. The $100 homes came either in kit form or were prefabricated, preassembled, and then dragged into place by horses.

The shotgun house may be the seed from which the entire real estate and tourism industry sprouted in Santa Monica.

On Sept. 13 the Architectural Review Board unanimously approved the landmark’s move back to the Ocean Park neighborhood. The designation resulted in the City taking ownership and it was subsequently relocated and temporarily stored, first at the airport and then on the City-owned Fisher Lumber site until a permanent location was identified, according to the staff report.

The Santa Monica Conservancy took great care to situate the shotgun house on the property and to align it not only with the other houses on Second Street, but with its original alignment only one block south of the site. Carol Lemlein of the Santa Monica Conservancy explained the house will be expanded upon since the previous site removed an addition, which was not preserved in the move.

Commissioner Pugh pressed for another site plan that would allow for the house to sit up against the street for residents to enjoy the landmark. “It’s more than just a PR standpoint,” he said, adding that the parking in front of the building blocked the face of the building from the street. He encouraged varied layouts that would outweigh the “urbanistic” values of having parking on-site.

Parking is required on-site as part of the variance, Lemlein said, which also applies to the Ocean Park Library that will lose multiple spots to allow for the move. Librarians use the lot and were very concerned about maintaining the same parking spaces, she said. The project architect explained that multiple locations for the parking had been explored, but failed to find a viable option behind the building.

Pugh still pushed for reduced parking. Commissioners Gerda Newbold, Jason Parry, and Jennifer Kennedy agreed that the shotgun house should line-up with neighboring houses instead of being segregated toward the street.

Including a trash receptacle enclosure with a roof required the special variance mandatory for the project to be approved by the commission, the project architect said. The lid will keep seagulls or unwanted people out and make it quieter for the neighbors. The enclosure will be situated on the border of the property line, a common practice according to City staff.