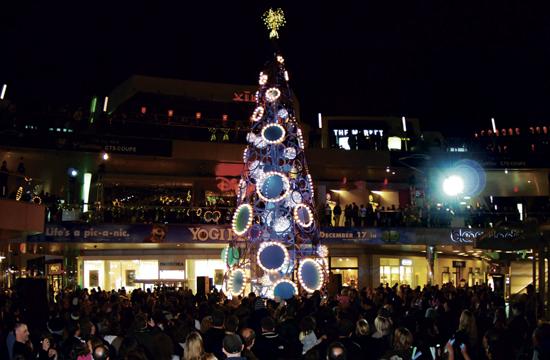 The holiday season kicked off in Santa Monica on Nov. 20, with a tree lighting celebration that mixed KCRW DJs with a 50-foot tall holiday tree sculpture at the new Santa Monica Place mall.

Several hundred people packed into the main level plaza on the windy night conjuring thoughts of snow and reindeer in the sky. Despite the chill, the tree lighting event, called Santa Monica Shines, attracted Westside residents from 6 to 7 p.m. to experience what can only be called a modern art installation, which illuminated the square.

The tree is a computerized installation made of sculpted aluminum and steel, with LED lights. The unveiling of the tree washed the entire plaza in the soft blues, greens, and purples aptly reminiscent of worn beach glass due to its proximity to the Pacific Ocean. Created by Las Vegas-based Global Experience Specialists, Inc. the lights synchronize with custom created soundtracks from KCRW radio DJs.

KCRW music director and radio personality Jason Bentley hosted the night bestowing four holiday mixes that create a holiday groove. Bentley merges the incomparable Nat King Cole with turntable stylist Cut Chemist. Just like the look of the tree, the sound is a departure from the traditional and the expected, opting for an unusual blend of current beats thrown-in with classic holiday fare.

The Living Sisters also appeared for a short performance during the chill of the night. The trio includes some of L.A.’s best singer-songwriters, including Inara George (of The Bird and The Bee), Becky Stark (of Lavender Diamond), and singer Eleni Mandell. The ladies’ harmonies recall an innocence of yesteryears, or at least remind Santa Monicans of the possibility of carolers.

Monica Staniec, a Santa Monica resident, came out after seeing George of The Bird and The Bee perform this summer at the Hollywood Bowl. The appearance of the Living Sisters along with KCRW’s Bentley, was too much to resist, she said.

“Holiday events spring up all over L.A., but this is more contemporary than anything I’ve seen in a while,” Staneic said. “The tree is really amazing to be able to move along with the music and is definitely a change from the usual photo-op with Santa.”

The Santa Monica High School Choir, comprising of about 30 students, performed before the waiting audience as well. They were joined in the line-up with Brentwood Academy of Dance, Revelations Company by Talent Lab from Westlake Village, and Brenna Miles, who attended GRAMMY Camp 2010, a summer music-industry program from the Santa Monica-based GRAMMY Foundation.

Santa and Mrs. Claus even made a special appearance at the end of the program, delighting the crowd and putting sparkles of Christmas goodies in children’s eyes.

The new Santa Monica Place rivals the sparkle of the Westfield Century City shopping mall as a three-level, open air shopping and dining center located at the end of the Third Street Promenade in Santa Monica.

Anyone who missed the opening night can enjoy holiday tree performances every evening from Nov. 20 through Dec. 31. Nightly performances take place every 30 minutes after dark.