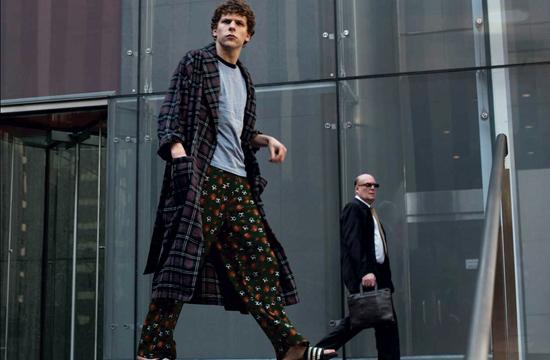 Many members of the sold-out audience waiting to see “The Social Network,” at the Aero American Cinematheque on Nov. 21 could be seen fiddling with their digital devices. Possibly they were sending Facebook messages that they were waiting for a post-screening Q & A with the film’s screenwriter, Aaron Sorkin, plus three of the film’s actors: Armie Hammer (the Winklevoss twins,) Andrew Garfield (Facebook founder Mark Zuckerberg’s friend and partner Eduardo Savarin,) and Justin Timberlake, (Napster founder Sean Parker).

Sorkin, the screenwriter of such acclaimed films as “A Few Good Men,” “The American President,” and “Malice,” was asked how he got involved with adapting the true story of Zuckerberg and Facebook. He explained that he had been sent a 14-page book proposal by Ben Mezrich with the possibility that he might be able to adapt it. “I said yes on page three,” Sorkin continued. “Set against this very modern background was a classic story of friendship, loyalty, power, class – the things Shakespeare and Dostoyevsky wrote about.”

Mezrich’s proposal became a book, “The Accidental Billionaires.” But Sorkin, who wrote his screenplay at the same time Mezrich was writing the book, did not base his script on the book, but rather on depositions from the lawsuits against Zuckerberg, Zuckerberg’s own blogs, articles in the “Harvard Crimson,” and first-person accounts by some of the people involved. Some information was provided by Savarin prior to his signing a non-disclosure agreement following settlement of his lawsuit against Zuckerberg.

How closely does the film adhere to what really happened? Sorkin noted ,“There is a difference between a non-fiction film and a documentary.” In films based on real events and people, names are changed, characters are combined, events that are actually unexciting (like courtroom procedure) are made more dramatic, and real people become “characters” for the writer. But it was important for Sorkin to keep “a moral compass,” because there was a “tremendous responsibility” to keep the characters from “saying something untrue.”

“I like [Akira Kurosawa’s] “Rashomon,” said Sorkin, referring to the famous Japanese film that is told from four perspectives. “And I like courtroom dramas. I used two depositions as pillars to tell the story.” He told the story from more than one point of view, so that the audience does not get just one person’s view of “the truth.”

Did any of the cast members get to meet their real-lifer counterparts?

Timberlake, who said that the script was “like catnip” to him, and who was eager to play the role of Sean Parker, had a chance encounter with Parker outside a bar. “I said ‘Hi.’ He was a real nice guy.” Garfield admitted that he had not met Eduardo Savarin but would like to. “I assume [the material in Mezrich’s book] was a very raw and immediate reaction to the events at Harvard… he seemed like a very warm individual, a caring friend who was duped.”

Sorkin and the three actors had the utmost praise for each other, for the absent Jesse Eisenberg who plays Mark Zuckerberg, and for director David Fincher. “Fincher is peerless,” said Sorkin. “He embraced that it was a story of language. He got extraordinary performances with young actors. And he made scenes of typing look like bank robberies!”

When an audience member lauded Sorkin for his writing, especially the sparkle of his dialogue, he explained: “I became a writer because as a child, my parents took me to plays and I loved the sound of dialogue. It sounded like music to me.”